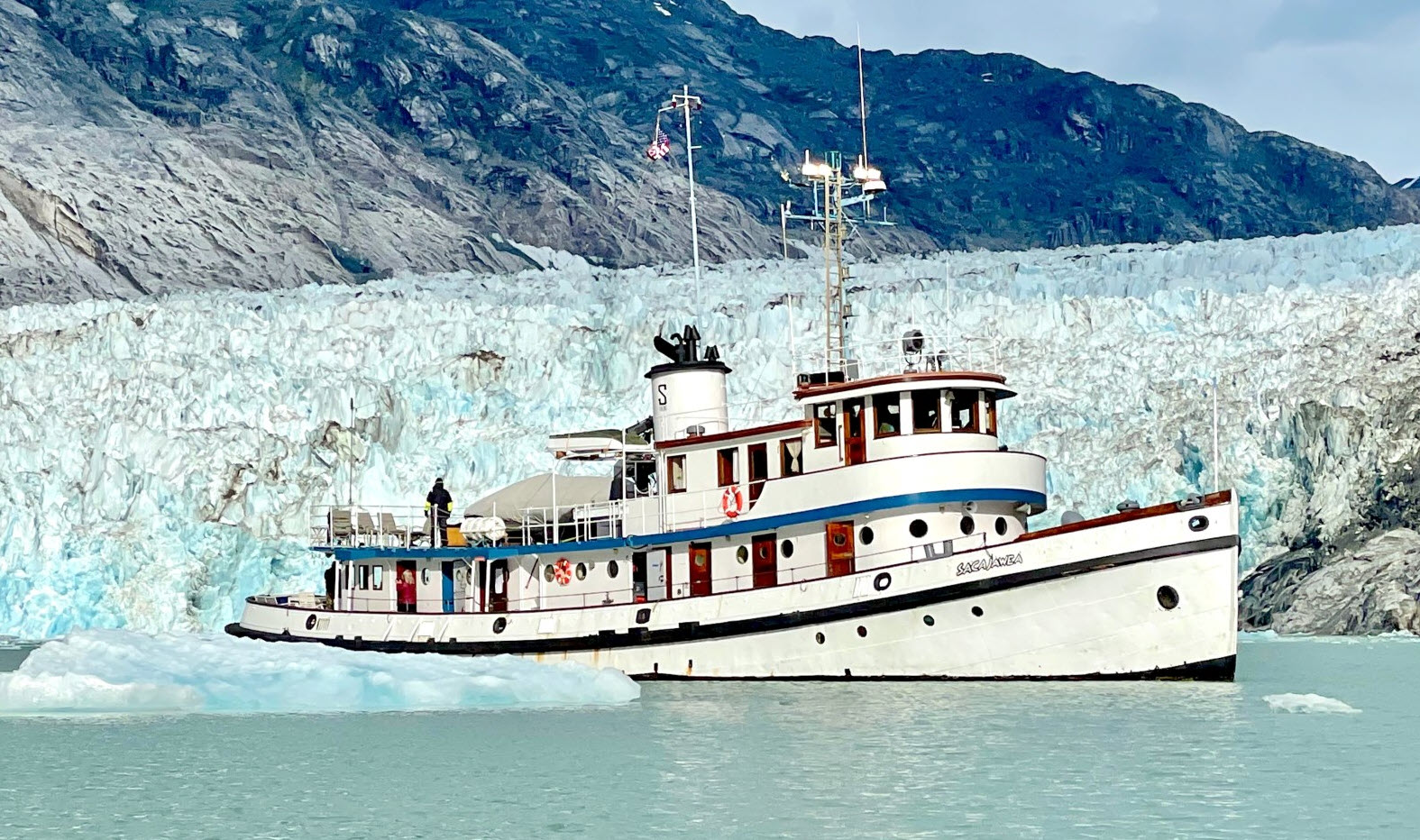 NOTE: SACAJEWA is going up for auction on June 23rd at 7:00pm Eastern. Details: https://boathouseauctions.com/auctions/sacajawea

Most boating folks I know are drawn to the traditional look and feel of honest working craft, no matter if it is military, commercial, or for fishing. Each is different yet all share the common thread of being the real deal. Whatever their mission was, or is, it is the center of the design spiral, unlike pleasure boats which seem to come at it from the opposite direction. If these vessels are meant to go to sea, you can pretty much guarantee they have the utmost seaworthiness and seakeeping abilities.

Over the years, we covered all sorts of interesting boats, from small workboats to small ships. In fact, it was one of the reasons I started PassageMaker Magazine, to attract and showcase these unique vessels. We’ve featured Army T boats, those big SUVs that the military used for many different purposes. Initially heavy, wood boats for service in World War II, they evolved into steel 65-foot transport ships for service in Korea, Vietnam, and around North America.

We’ve toured large Navy tugs that were converted into cruising boats, some saw action in the battles of the Pacific. Other boat tours showcased owner conversions of Gulf shrimpers, British Columbia Forestry boats, trollers, Scandinavian fishing boat conversions, seiners, even ex-Navy patrol boats. There are even organizations that celebrate these unique cruising boats, such as the Westcoast Work Boat Association (WWBA).

Interest in these boats motivated some commercial builders to come out with their own pleasure boat interpretations of their working fleet, such as Delta Marine and LeClercq Marine in Seattle.

But rarely do we come across a vessel that is not only unique, with features perhaps ahead of its time, but also comes with a rich history of documented service. A vessel that has been kept mostly original while plans are afoot to integrate her with newer, cleaner technology. 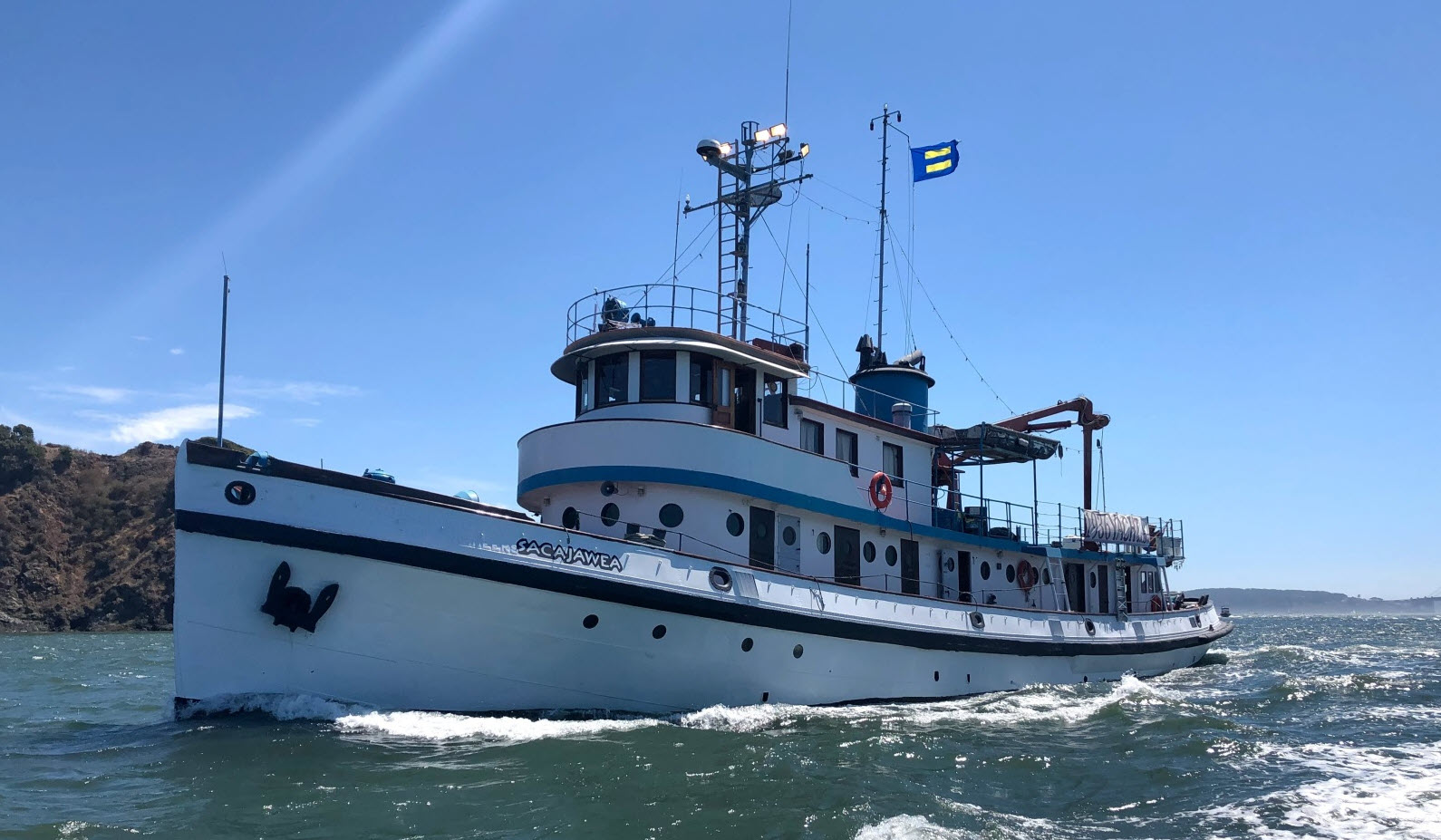 Let me introduce you to SACAJAWEA, and the fascinating history that surrounds her, and in which she played a part.

The 125-foot riveted steel ship was built in 1936 at the Lake Washington Shipyard in Houghton, Washington to a design by W.C. Nickum. Officially classified as a hydrographic survey ship, her mission at the time of construction was to support the Portland Oregon District of the U.S. Army Corps of Engineers.

She was christened the Robert Gray, who was the first American to circumnavigate. But that accomplishment had little to do with his name being chosen for a new ship for hydrographic survey work in Oregon. Rhode Island sea captain Gray was the first non-Native American to successfully sail and navigate Wimahl (Chinook for “Big River”). The Spanish had been unable to navigate its turbulent entrance, and the British could not find it, and so named the closest point of land Cape Disappointment, as they believed the Spanish had been mistaken. Even George Vancouver later sailed past it.

On May 19, 1792, ready to set sail back out to the Pacific Ocean, loaded with furs and skins, Captain Robert Gray gave Wimahl a new name, the Columbia River, after the name of his ship, the Columbia Rediviva.

Not missing the symbolism of Christopher Columbus, what is particularly noteworthy is that an American, not the British Navy, first established a presence—an American presence—on the Northwest coast of North America.

The Robert Gray spent a great deal of time performing hydrographic survey duties on the Columbia River, making possible the economic development of this region of the Pacific Northwest.

(Seen below: The Lake Washington Shipyard - photo taken in 1921.) 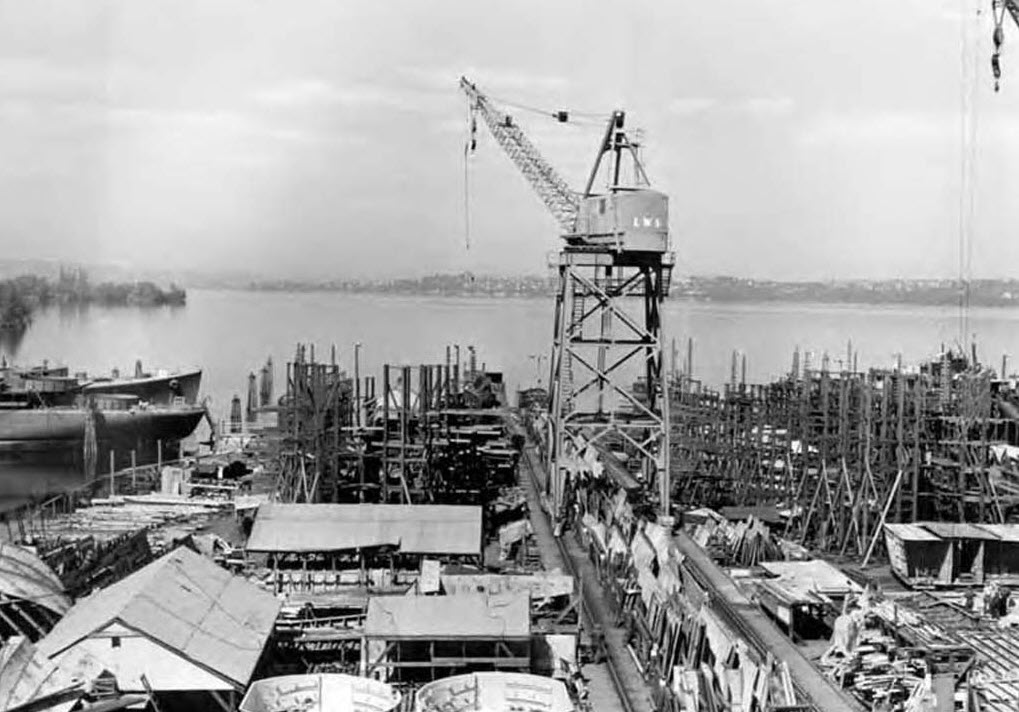 Another piece of local history is that the Lake Washington Shipyard, where she was built, gained instant recognition in 1935 for the launch of the ferry Kalakala. This futuristic ferry was soon known worldwide, and the spaceship-looking ferry would go on to serve the Washington State Ferry System for many years.

In addition to constructing the Robert Gray, the shipyard built almost 30 Navy ships for the war effort, many of them seaplane tenders. At one point there were 8,000 men and women working in the busy shipyard, although after the war the need for shipbuilding and ship repair slowed to a trickle. During the decade starting in 1976, the converted land of the former shipyard served as the training facility for the newly formed Seattle Seahawks.

Today the place is a beautiful business park called Carillon Point, in what is now Kirkland, Washington.

There is a hint that this ship had somewhat of a stealthy agenda, which required authorization from the office of President Calvin Coolidge seven years before she was launched. The Robert Gray was painted white, unlike other government vessels. This made her appear more like a private yacht than an official working boat. The current owners suspect that over the years she conducted hydrographic survey activity in sensitive waters where she would not stand out, or perhaps did not belong, blending in as just another millionaire’s private yacht. Soon enough, it became clear the remote Aleutian Islands in Alaska were in desperate need of proper navigation charting that only a survey ship could provide. There was a war coming.

During World War II, the military reclassified her as Large Tug LT666, and painted her standard navy gray. LT666 was stationed in Alaska and directly supported the fighting and retaking of islands in the Aleutian chain. (To most Americans this might seem like a back seat assignment. But the little-known Battle of Attu was one of the nastiest of the Pacific war, with thousands of Japanese soldiers making a desperate, last-ditch banzai charge at the American lines. American losses were heavy, but over 2,000 Japanese were killed in the ensuing and bloody hand-to-hand fighting. Only 28 survived.)

After the war, the boat was renamed back to the Robert Gray and transferred to the San Francisco District of the Army Corps of Engineers. Continuing her hydrographic survey work, she eventually returned to Alaska.

She was originally designed and built with a first-of-its-kind dual diesel electric propulsion system from the Enterprise Engine Corporation. This diesel electric drive allowed the boat to operate very efficiently at the slow speeds when conducting underwater hydrographic work.

In 1970, she was repowered while operating as the Don J Miller II for the U.S. Geological Survey (USGS) with a direct drive, 750hp D398 Caterpillar engine. She also received a helipad on the boat deck as her remote survey activities often took her well off the grid and supplies and crew were transferred by helicopter.

The current owners purchased the vessel in 2018 from an experienced salvage company owner who had the boat for 30 years, taking excellent care of the 125-footer and its many redundant systems.

Most of the boat is still original and the owners soon expect the boat to be listed in the National Register of Historic Places. Given its prominent contribution in hydrographic discoveries in the Northwest, contributing to economic development along the Columbia River, her wartime participation in the Aleutian campaign, and exploration and recovery survey activities after a major earthquake in Alaska, she has rightly earned her place in the history of the Pacific Northwest. 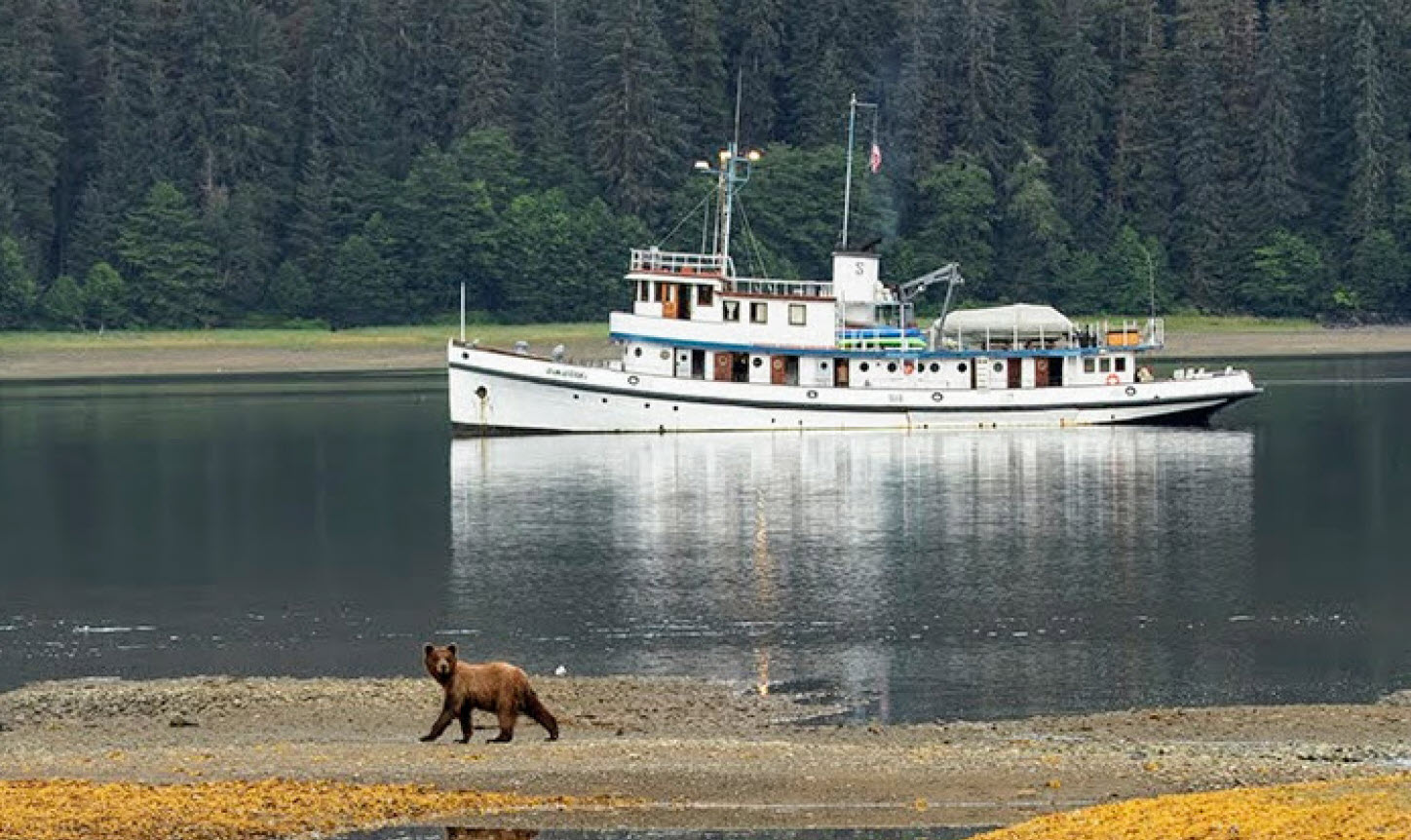 The current owners renamed her Sacajawea, after the Native American woman who helped Lewis and Clark during their trip of discovery. In the same way, they will continue taking nature lovers and adventurers into the wilds of Alaska to experience the natural world up close and personal. She was repainted back to her original white color scheme in 2020.

Last year they ran several Alaska charters, traveling between Wrangell and Juneau five times. The absence of cruise ships made for spectacular remote cruising. With the popularity of adventure cruising being all the rage these days, this vessel is among the fleet of the dozen or so classic boats currently doing Alaskan charters.

The owners have many ideas and plans for Sacajawea to develop her charter potential even further. They want to remove the Caterpillar main engine and install a modern version of her original diesel electric propulsion system. This would greatly reduce the carbon footprint. Maintaining a “green” charter operation in the remote wilderness of Alaska is one of their goals. With the newly installed 60 kW inverter system they also don’t need to run a generator when at anchor. And when Sacajawea is under way there would also be no need to run any of the four generators currently on board, which collectively can supply 180 kW of power for a full range of operation. This is a military survey vessel after all, with huge power requirements for its hydrographic operations. 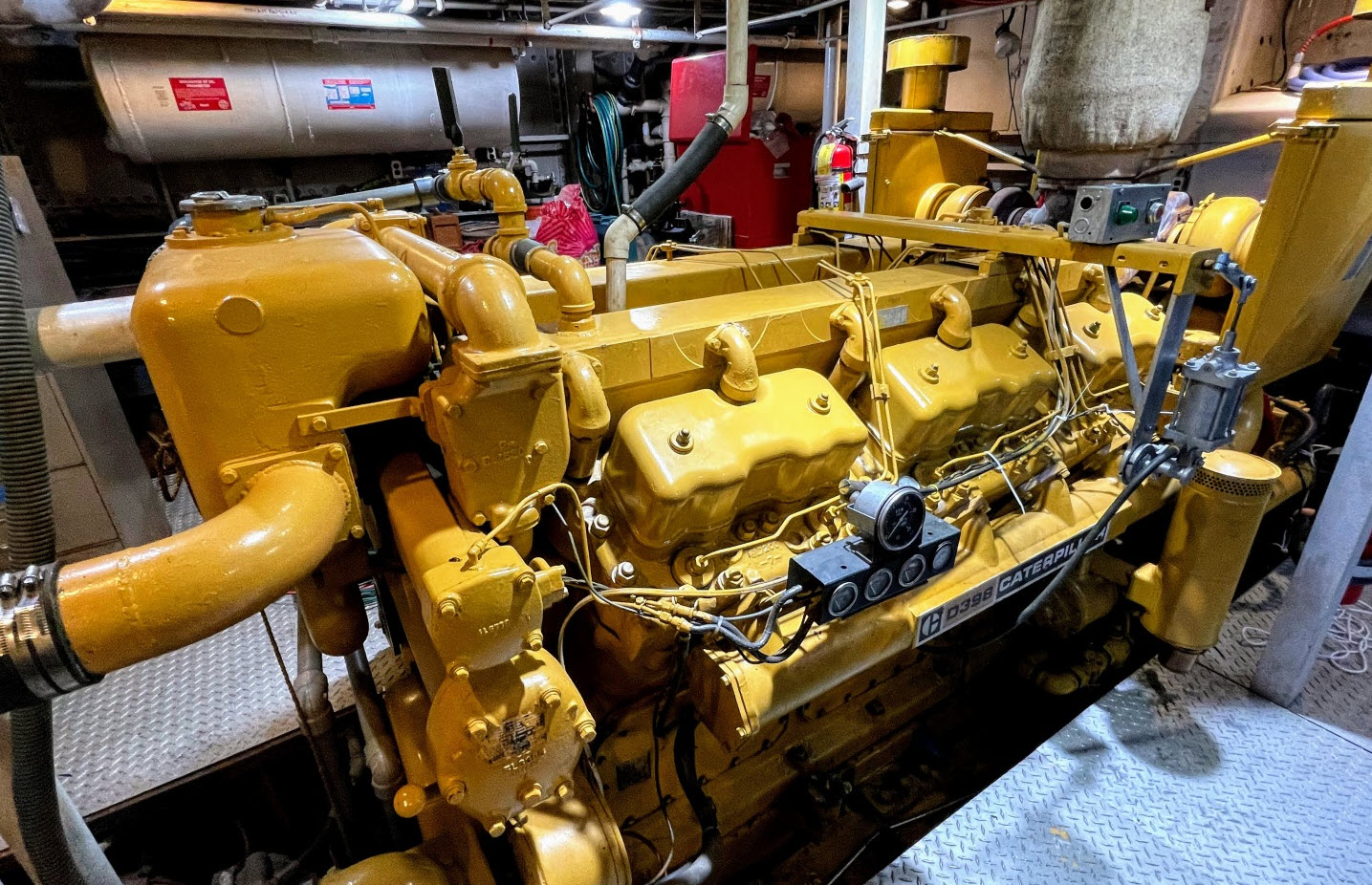 To say this 125-foot vessel is well equipped would be an understatement. She has the original (and fully functioning) Sperry gyroscopic compass, a survey-grade sonar, dive compressor, watermaker, helipad, and hydraulic crane for the 21-foot 150hp Volvo RIB.

No lightweight, she is 400 gross tons, 199 net tons, carries 8,000 gallons of fuel, 6,000 gallons of fresh water, and has a 200-gallon holding tank. Sacajawea is a seaworthy, no-nonsense, self-sufficient small ship. Working in the Aleutian Islands demands that, even getting there demands that.

Sacajawea can accommodate 12 guests plus crew in eight cabins. In the forepeak is a single cook’s cabin and two double bunk cabins. Aft there is a four-bunk cabin, a two-bunk cabin, a double cabin, and an engineer’s cabin. Off the pilothouse is the owner’s stateroom with sitting room, head with shower, and full-length lockers. The ship has six heads, two of them ensuite.

The commercial galley is well equipped with storage for long-term and comfortable living. The cozy dining area seats 12. The main saloon is accessible from starboard or port side decks and since it is aft, has large windows and ports on three sides—creating a bright enclosed lounge living room, with four couches to provide seating for 16 people and additional standing room with easy and direct access to the wet bar and mini refrigerator.

(See below: The commercial galley on SACAJAWEA is equipped to handle large parties.) 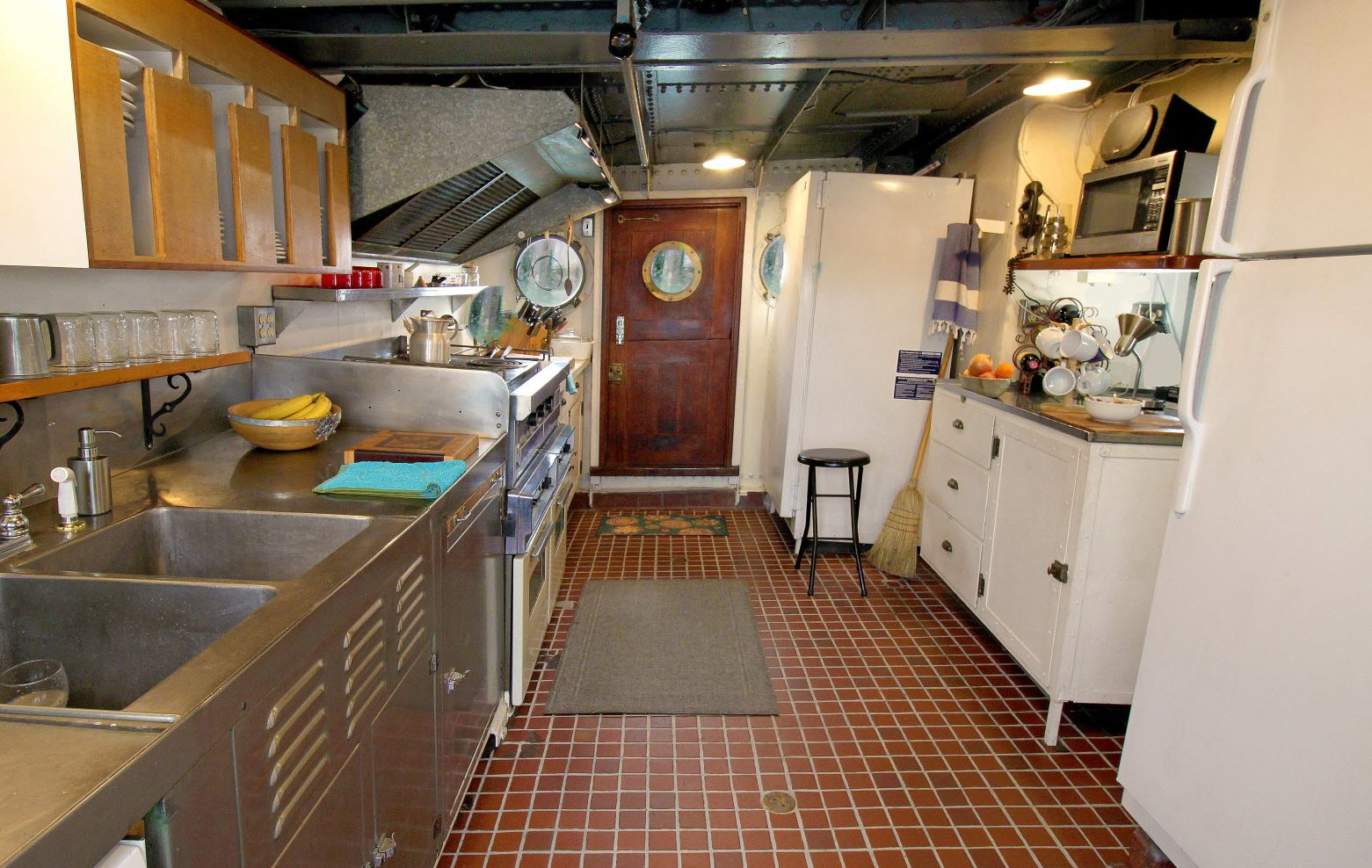 The plan for their charter business is to spend up to 19 weeks in Alaska and charter the winter months in the Sea of Cortez. Transiting the Northwest Passage is also well within the abilities of this rugged little ship, which is a rare adventure cruise opportunity most charter vessel operations cannot even consider.

Sacajawea is an ideal adventure charter yacht for operators who can appreciate the history and accomplishments of this rare vessel. For those seeking adventure in the wild with no taste for a cruise ship experience, this is a unique opportunity to enjoy life on a celebrated and historically significant yacht.

For more information and full specifications of Sacajawea, the complete listing is available from Seattle Yachts, seattleyachts.com, or contact Gena Kraft at 1-408-315-3874 or by email at Gena@SeattleYachts.com.