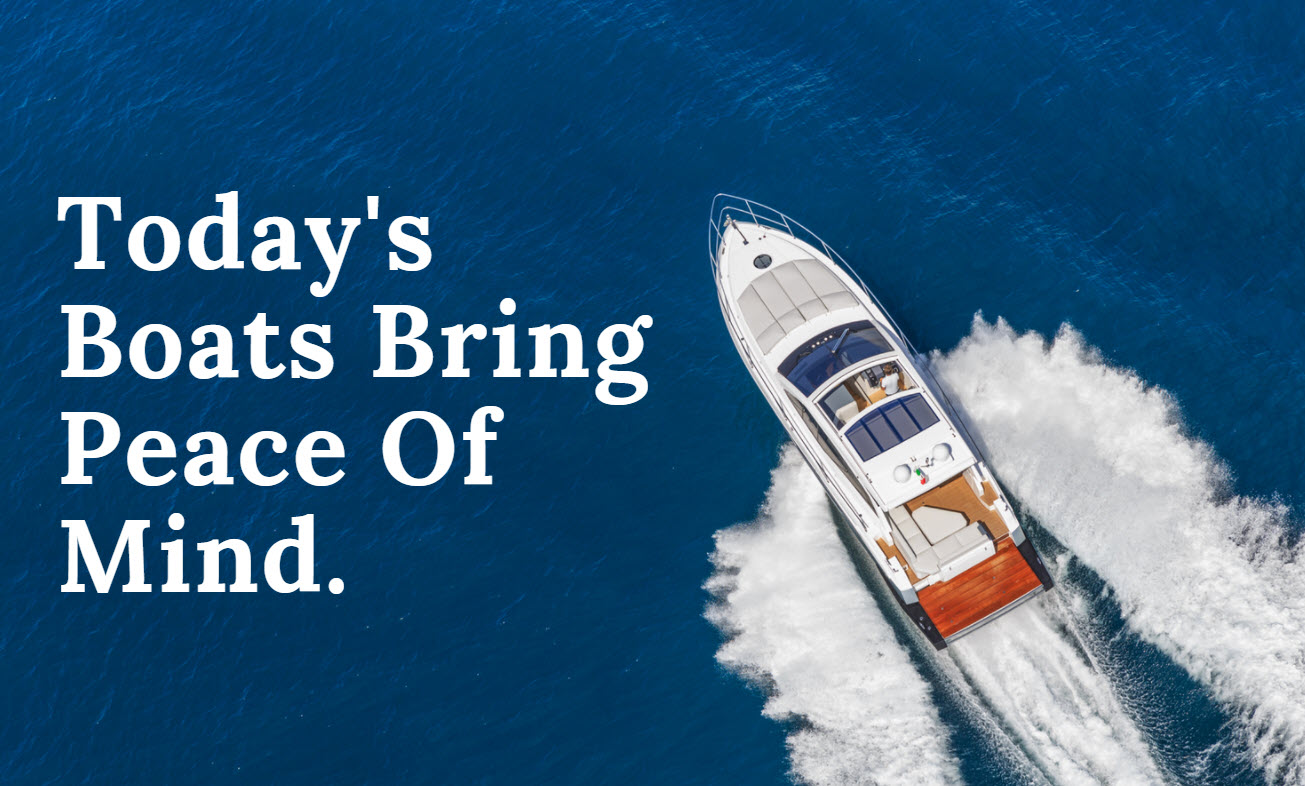 I recently helped a couple sift through the brokerage market of cruising motorboats and trawlers. There is a remarkable shortage of quality used boats out there and the lack of inventory will no doubt impact the fall boat shows if dealers have nothing to display. People in the market are now looking at boats that are older than they would normally consider, as there just aren’t many late-model boats out there.

It gave me a fresh look at the used marketplace and reminded me just how far cruising boats have evolved from the trawler yachts built in the 1970s through the 1990s. Today’s boats are so much better at keeping crew safe and secure. While what worked just fine for most of the cruising community back then, in hindsight certain elements of the design spiral were missing, or poorly executed. It didn’t seem so at the time, of course, but compared to modern cruising boats, these trawlers were rather primitive. We had to adapt to them, not the other way around. And it was often little things that stood out, and the builder either didn’t know there was an issue or didn’t bother to change.

One boat comes to mind that is a perfect example of this. The Monk 36 is one of my favorite trawlers, a perfect size for a couple out cruising, very seaworthy, good accessibility, and simple systems. It is still a great choice for wintering in the Bahamas, and ideal for the Great Loop. Yet there were two things that really bugged me about the boat, and the builder didn’t address either of them. One leg of the standing rigging for the mast ran directly across the steps up to the flybridge, and one had to duck under it heading up or down. With a little imagination this could be done differently. The second, more serious issue involved the steps down to the aft stateroom. Those step up to the flybridge are simple teak slats mounted on the outside of the cabin side. Directly underneath is the stairway down to the stateroom, which does not have enough headroom for someone who is six feet tall. By cutting into the deck mold and making those steps up to the flybridge part of the molded structure of the cabin, the result would be increased headroom underneath the steps. But they never changed it, and one almost can’t help hitting his head when traversing that stairway in a seaway. 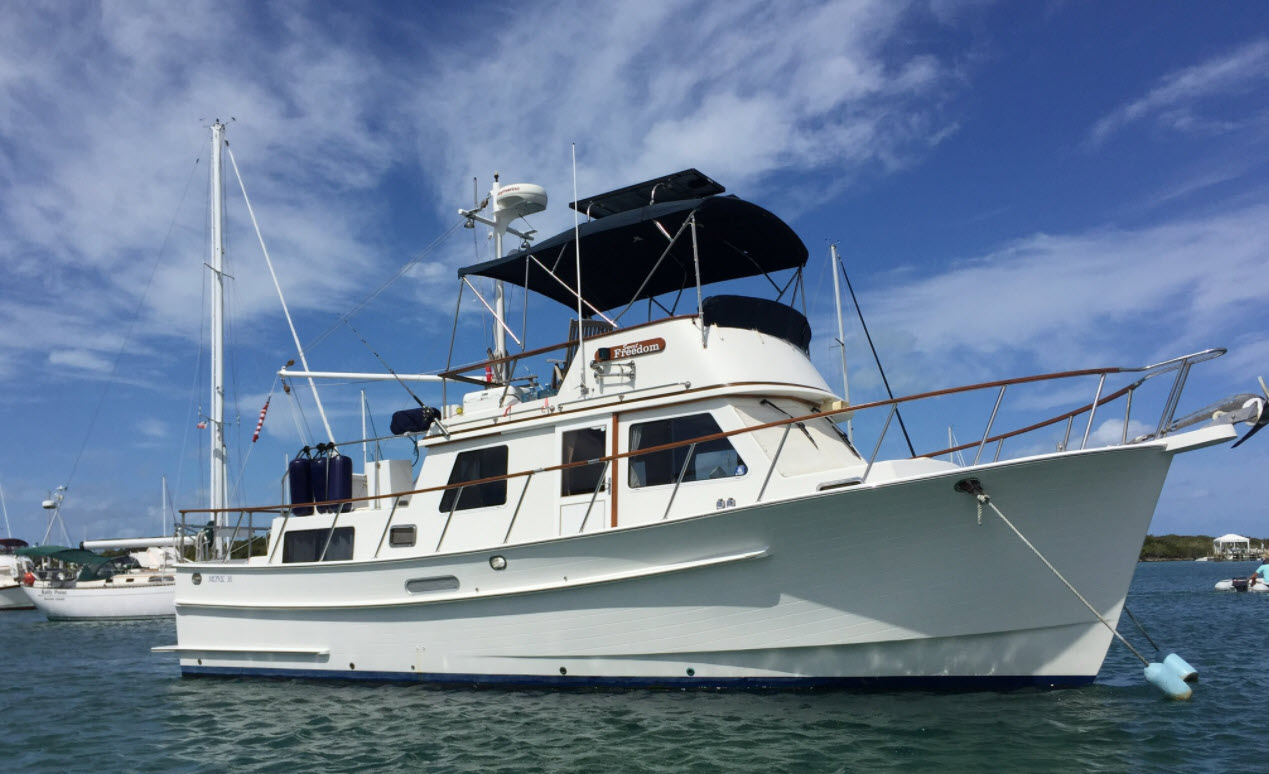 Some vintage touches, such as extensive use of exterior teak, with beautiful teak decks and glossy trim brightwork, provided that yachtsmen-like look admired by the boating community. Tour any popular anchorage in those times and these boats, such as a pristine Grand Banks, would stand out as a shining example of the trawler genre. All were fiberglass by then, as wood hulls had fallen out of favor decades before. But the brightwork continued, as did the inevitable, ongoing maintenance.

In contrast, today’s boats are packaged quite differently, providing a vehicle to enjoy the trawler lifestyle but with less maintenance, newer technology, and, in many ways, a safer approach to the cruising experience.

A couple of examples really stand out. I’ve noticed that swim platform staple rails are more mainstream these days. You will see them on many cruising boats, from small Ranger Tugs all the way up to large Nordhavns and Northern Marine yachts. They are standard or popular options on many new cruising boats. And staples can be retrofitted to most any swim platform, no matter if it is a Selene, Nordic Tug, Krogen, older Grand Banks, vintage Taiwan trawler, or classic motoryachts. And they just make sense.

(Seen below: The swim platform rails on a Selene 40.) 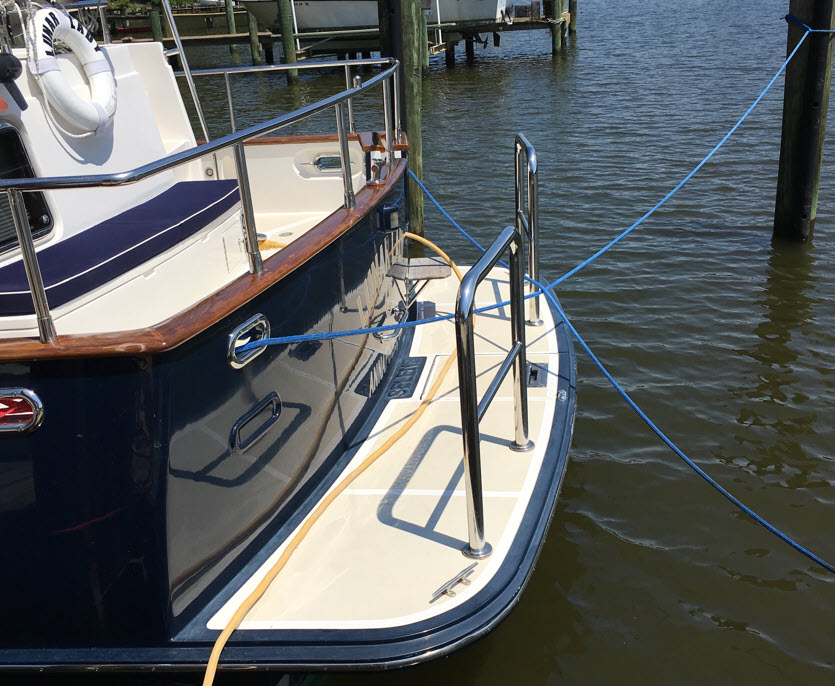 You are ashore for dinner, while the boat sits quietly at anchor or on a mooring in the harbor. When it is time to go home for the night, the dinghy ride is hopefully dry and without drama, but during the summer months there are no guarantees. As you approach your mothership’s swim platform, everyone in the dinghy gets ready to grab hold of the swim platform in preparation to getting back aboard the boat.

In the old days, even under ideal conditions, there wasn’t much to grab onto, and no easy way to secure the dinghy to the trawler. Boats with teak swim platforms often had gaps in the teak strips that allowed one to grab the platform, at least temporarily. But efforts to get out of the dinghy onto the swim platform requires more athletic skill than most older couples have. With nothing to grab to steady one’s transition from seated on an inflated dinghy tube to standing safely on the swim platform, it is a risky moment of potential mishap. And if the seas are choppy, it entailed a moment or two of danger, unless one chooses to get a wet butt by sliding onto the swim platform. So much for your wife’s white linen slacks.

These days, large diameter, stainless-steel staple rails provide an enormous improvement to the entire boarding process. Even older people, who may have arthritis, bad joints, or other mobility issues, can confidently grab hold of the railing as they steady themselves while stepping up or down between dinghy and swim platform. These rails are such a safety improvement it is amazing we did without them for so long. 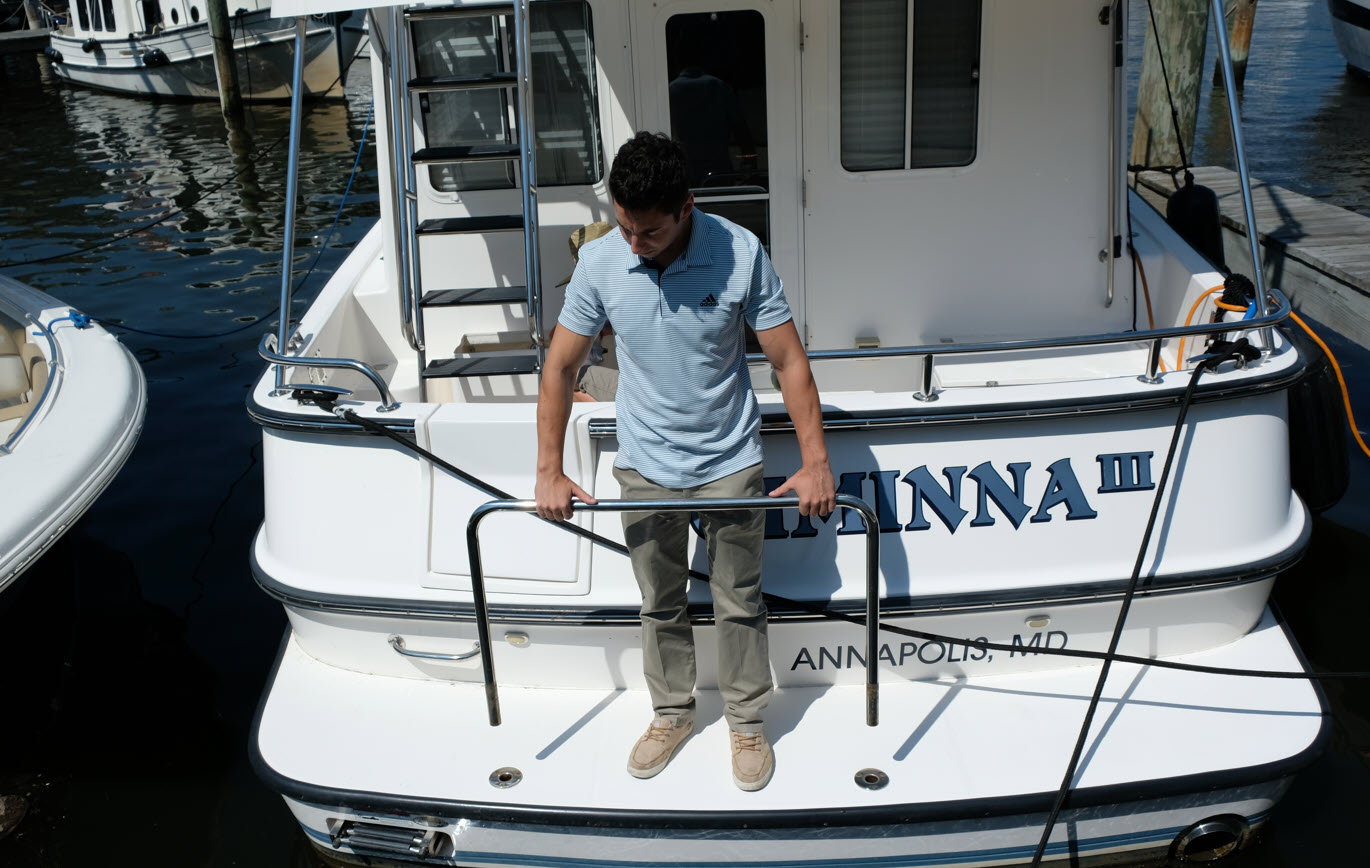 Thankfully, it is a great aftermarket project, and well worth the cost of adding them to a trawler’s swim platform. There are companies that fabricate a range of staple rail products to fit most any swim platform configuration and size. If one can attach a backing plate to the underside of a swim platform, adding staple rails is well within the abilities of a boat yard. Some rails are installed to be removable, which can be handy if one prefers to flip the dinghy onto the swim platform when under way.

Staple rails also make a world of difference when dealing with floating docks, kayaks, and SUPs. They eliminate the balancing act on moving platforms.

Another improvement is the use of efficient LED lighting on the boat’s interior and exterior. It is now possible to have the boat lit up when crew goes ashore, as the drain on the house batteries is minimal. Coming back to a well-lit trawler is much preferred over returning to a dark boat in the black of night. I have many memories of needing a flashlight to find my way inside to flip on some lights. We weren’t comfortable leaving incandescent lights on for hours as we dined and partied ashore, but now it is nothing to be concerned with. I suppose there are even apps to turn on exterior lighting from one’s phone as you approach the boat. 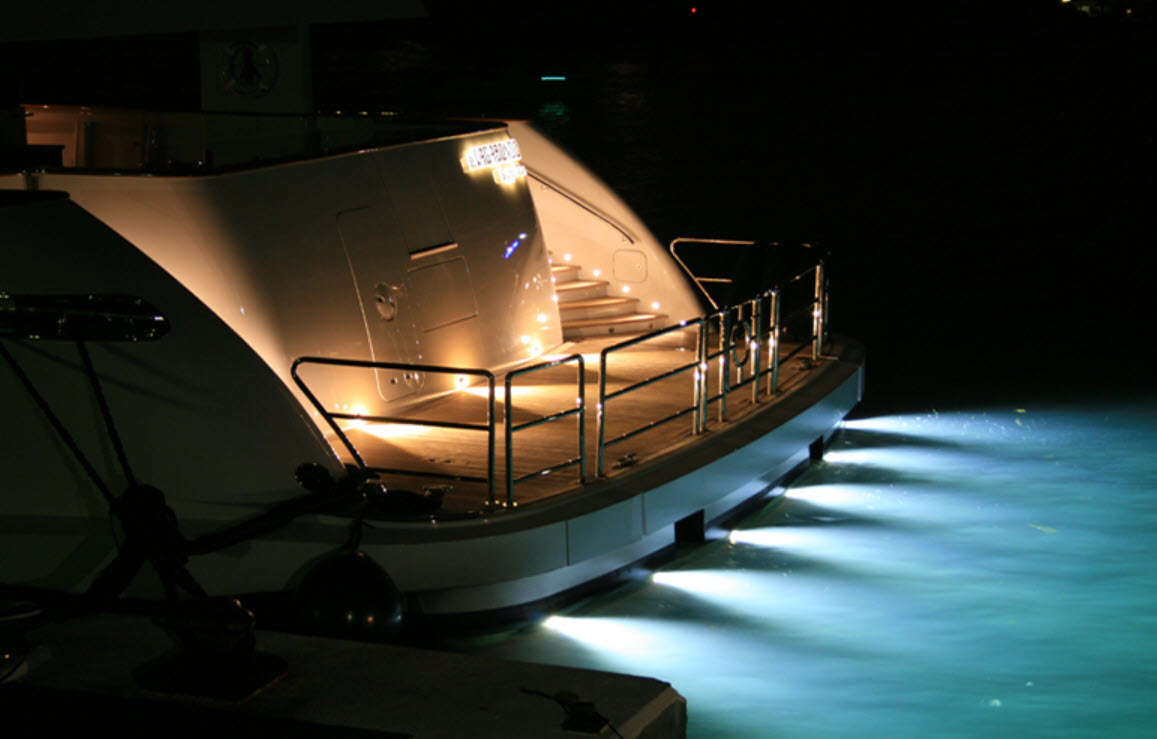 On my power catamaran, I installed LED rope lighting around the eyebrow of the cabin. You could see Spitfire in any anchorage, and coming back to the boat by water taxi or dinghy involved simply stepping onto the transom steps with confidence as the entire area was well lit. It was dramatic difference from the old days of fumbling for keys in the dark while hoping not to step on something slippery.

The use of bow and stern thrusters is also commonplace these days, and what a fine improvement they are. Most builders find that a bow thruster makes for easier docking and close quarter maneuvering, and adding a stern thruster just makes it even better. Docking remains the biggest hurtle to boating enjoyment, so anything that makes it easier and fun is worth the investment.
Taking it a step further, for those boats able to fit joystick controls at the helm, all I can say is Wow! Joystick controls make boat handling a real joy, whether waiting for a bridge to open, a spot at the fuel dock to open, or moving into a tight slip.

Spend time on a boat so equipped and you will wonder why all boats don’t have joysticks. Every member of the family can learn to drive the boat, and what can be more satisfying than that, building confident boat handling skills among the entire family? It stops being a spectator sport.

Gone are the days of hoping the boat backs in reverse in an expected direction, extended boat hooks at ready, all crew prepared to get a line around the nearest piling or onto a cleat. Those few seconds where the level of tension matches the current, wind, and slow speed nature of one’s boat, hoping for the best.

Maybe it is my age, but today’s boats are so much more appealing, and I can realize how far they have come because I spent a lot of time on the old boats. It is not just one or two things to make life aboard better and safer, it is the combination of improvements that makes such a better experience. I have noted only a few things here that have changed, but there are so many more. It really is a great time to own a boat.

Who would have thought they would come out with self-bleeding fuel delivery systems!?! That alone makes me smile, but only an old crusty guy like me would know why…