Getting An Older Boat Ready For Sea 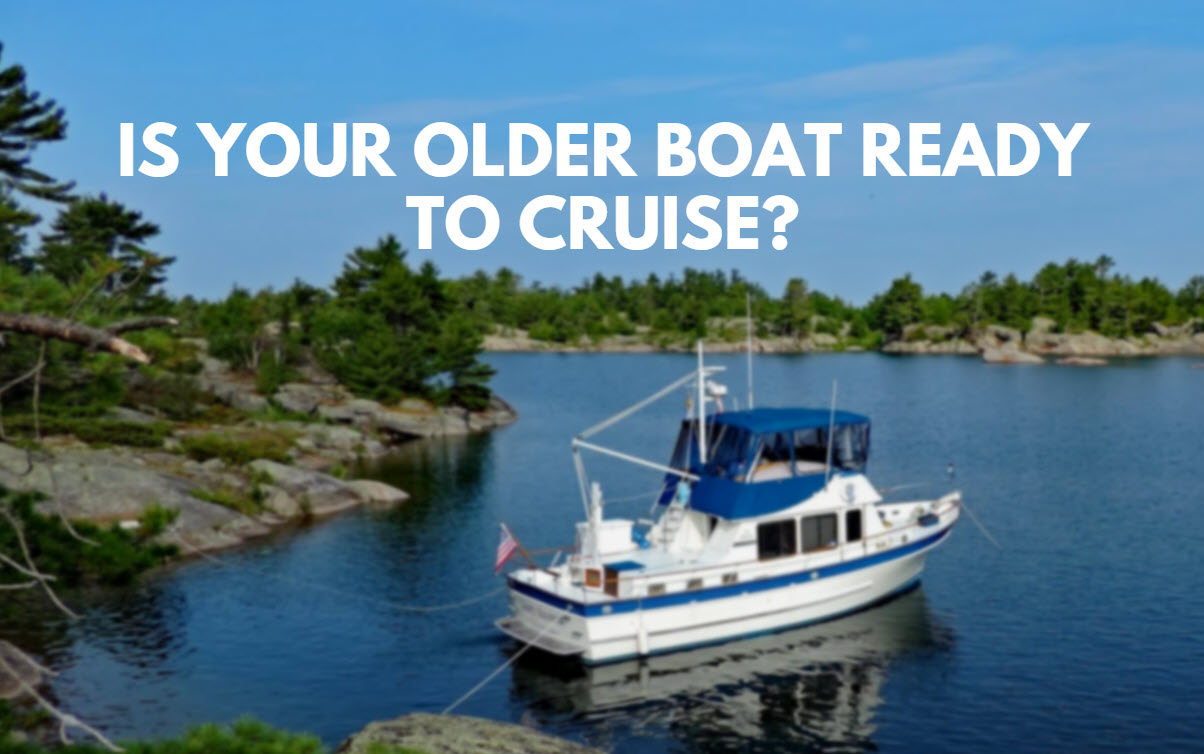 My favorite kind of inquiry is something like the following post I read last week on the trawler forum in Facebook. A guy buys an older boat, in this case a trawler that is over 40 years old, and wonders about its capabilities when caught in rough weather. What I love about this question is that it easily applies to any older boat, sailboat, or powerboat.

Hey guys, I have a 1979 Albin 43 with twin diesels. I am concerned about safety as we travel regarding storms and rough seas. I have taken the classes about picking your weather window to avoid storms but here in Florida they pop up all the time. Does anyone have any experience with rough water and an Albin Trawler? Are they safe for rough seas? What’s acceptable and what’s crazy? Any opinions are appreciated. Thanks! 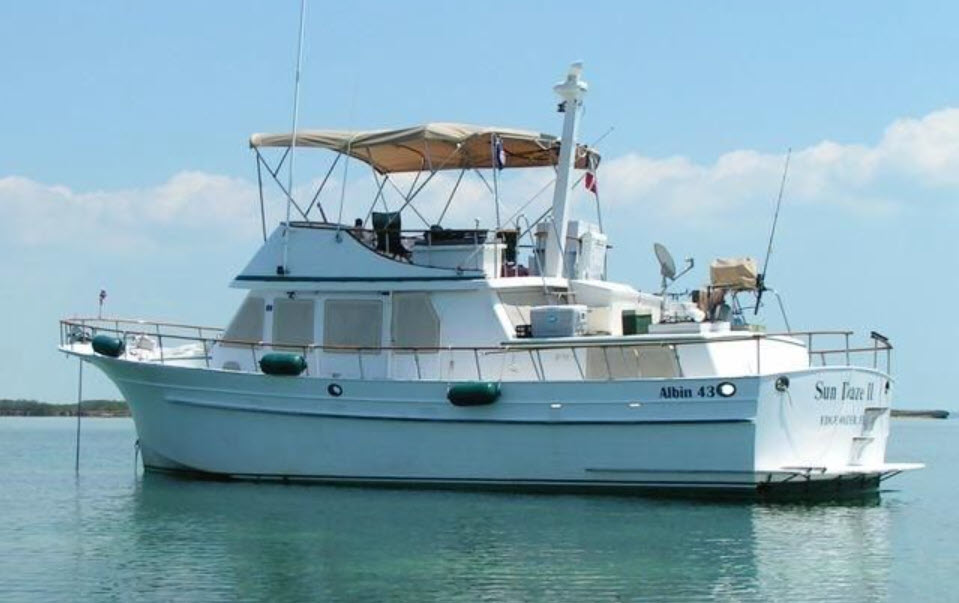 If you have read anything from me over the last couple of decades, you know I’m all about improving one’s seaworthiness before casting off the dock lines by examining a boat’s critical systems to make them as reliable as possible.

There are thousands and thousands of trawler yachts with similar semi-displacement hull shapes, found on the Albin, Grand Banks, Monk, DeFever, and countless other trawler lines. They have long been popular for economical and comfortable coastal cruising and enjoy a well-earned reputation for safety and seaworthiness. If the boat passes its pre-purchase survey, eliminating potential issues with delamination or water intrusion, one can be confident the boat will take rough weather in stride.

Having said that, my bigger concern would be the ship’s vital systems, especially when dealing with a boat that is 40 or 50 years old. A lot has changed over the years and careful inspection and replacement of system components will do much to improve the reliability of these systems when caught in rough weather.

Take the twin Lehman 120hp diesel engines in the Albin 43. Assuming they are original, I would be most interested in how many hours are on the engines. One who plans to go cruising would be wise to get ahead of the maintenance curve and replace certain items before they let go and cause difficulties under way.

But before we address engine issues, let’s examine the fuel system, by far the most common problem area in the engine room. Caterpillar says 93 percent of engine problems are fuel related. Tanks of this vintage are often mild steel, and who knows what condition they are in. Assuming there is access to the inside of the tank(s), one needs to inspect the outside and inside very carefully. In many trawlers, even from the premier builder of Grand Banks, the tanks tend to develop rust and it is quite common to simply replace these old fuel tanks with new ones. On some boats, such as the GB 42 Classic, it is done so frequently that it is a well-known project that has been thoroughly engineered.

While expensive, I can think of no other way to insure peace of mind. New fuel tanks, plumbed with modern, fire-rated fuel lines and fittings, including dual switchable fuel filters, will reduce fuel-related problems to a non-issue. No need to worry about four decades of rust, sludge, water, biomass, and junk inside the tanks. Forget the advice given to this guy’s inquiry to bring along plenty of spare filters. If it is done properly, one can get tossed around in a rolling seaway and know that fuel will not become a problem. Endlessly replacing filter elements is not a reasonable approach to my mind. Get it done right and lose the anxiety.

Back to the engines, I looked at the recommended documentation from American Diesel, who are Virginia-based experts in the Ford Lehman line of engines. Depending on the age and number of hours on the engines, they recommend the following:

The above goes a long way to ensure you have reliable diesel power, no matter what. And the sense of confidence this provides is priceless.

But I would not stop just in the engine room. What other systems are essential to trouble-free operation? A steering system this old is worth close inspection. Sailing a large sailboat off the wind in blustery conditions was exciting, sailing on the edge. But then one of the steering cables broke, strands letting go from the heavy strain on the system, a rusted sheave no doubt an accomplice to the failure.

Let me tell you, things went south in the blink of an eye. Thankfully, no one was hurt in the ensuing madness.

Whether it is mechanical or hydraulic, a boat’s steering system has lots of parts and they wear out. And when I spoke at length with an engineer from one of the major hydraulic steering companies in our market, he said that they no longer even recommend replacing individual components in a steering system older than 10 years, as the technology has changed so much. It is now a more cost-effective and more reliable approach to install one of the newer systems that might offer power steering with hydraulics only at the back end near the rudders. The product demos in his show booth were impressive. There is no longer a need for long hydraulic line runs between upper and lower helm stations back to the rudders.

Speaking of hydraulics, I can’t help but mention that during the Nordhavn Atlantic Rally, several of the participating trawler yachts had issues with their active fin stabilizers. When the fleet got to Horta in the Azores, technicians from the stabilizer companies were on hand to address these issues. An engineer from Naiad later told me the problem was that on many of these boats, they had been coastal cruising for a decade or more, and the systems had not been checked specifically for the much more demanding needs for running 24/7 for weeks to cross the Atlantic. Worn parts were now working harder than what they had previously done, and the demands were overwhelming. It was just one of those things no one really anticipated ahead of time. 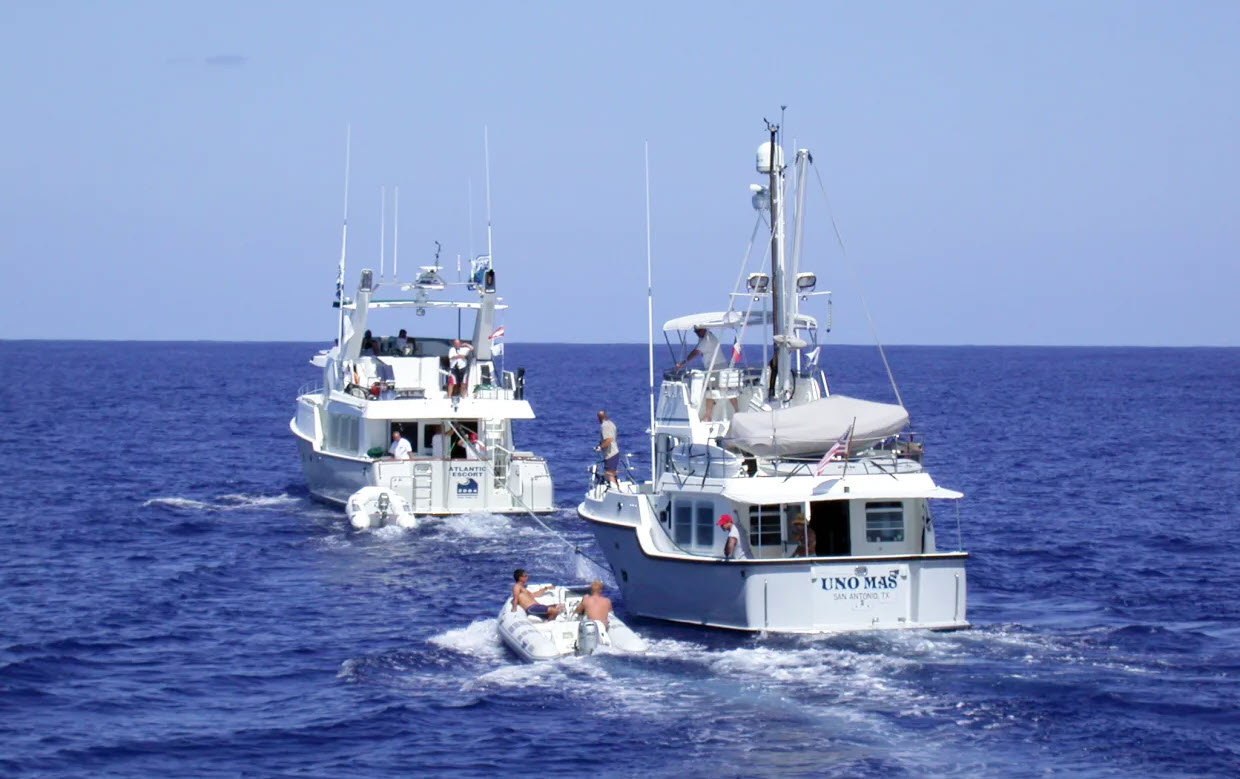 Given the above concerns of impending bad weather, and the need to get safely anchored ASAP, I would probably remove the boat’s windlass and send it back to the manufacturer to rebuild it to new condition. Again, it is not something I want to find won’t work when I need it NOW. Likewise, I would inspect and replace the anchor chain if necessary, and maybe go up in anchor size while I am at it.

Given the age of this Albin 43 (and every other vintage boat out there), it is fair to say previous owners installed some of the electronics and electrical devices themselves. So, I would spend some serious time behind consoles and flybridge controls to inspect the batteries, wiring, and remove overloaded terminals with four or more unsupported wires on a terminal post. Then clean up the wiring, band them together with zip ties, and make sure all connections are tight. Get those navigation lights up to snuff with LED fixtures at the same time.

Do it right once, and you will not have issues or gremlins appearing when you least expect or can afford it, such as coming into an unfamiliar inlet late in the day and the chart plotter begins to flicker off. Loose ground wires have caused more panic attacks than shark sightings.

(Seen below: The "Before" shot of wiring mess behind a console.) 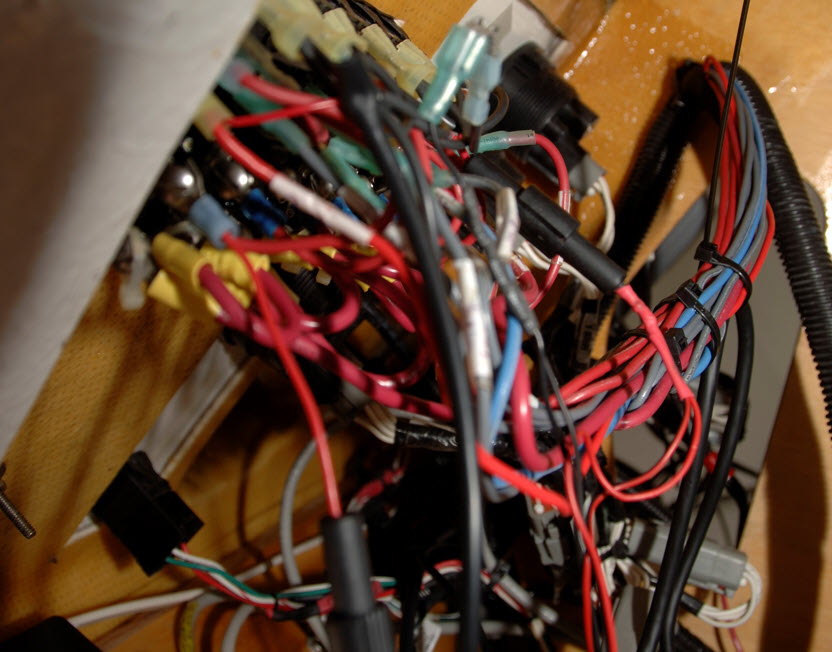 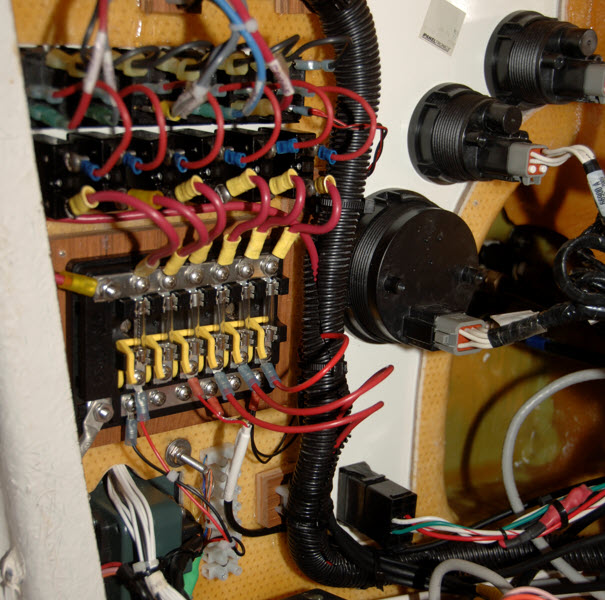 There are other systems that are important for the convenience and comfort of the crew, such as properly working heads and refrigeration. But they won’t cause me to worry at sea when conditions deteriorate. Air conditioning is nice in the tropics, and so is the generator to run it. But caught in one of those sudden Florida storms, which is the concern of the original poster, such things are not in the forefront of my mind. They can wait.

The process of doing the above will not only provide a great deal of confidence when weather suddenly threatens, but one will have a much more intimate relationship with one’s boat. And that is perhaps the best thing about owning a cruising boat that you know inside and out. You remain relaxed, confident, and able to enjoy the experience.

Running out a gnarly inlet can be downright fun when you know the boat is ready for sea. Bring it on!