Have A Backup Plan! 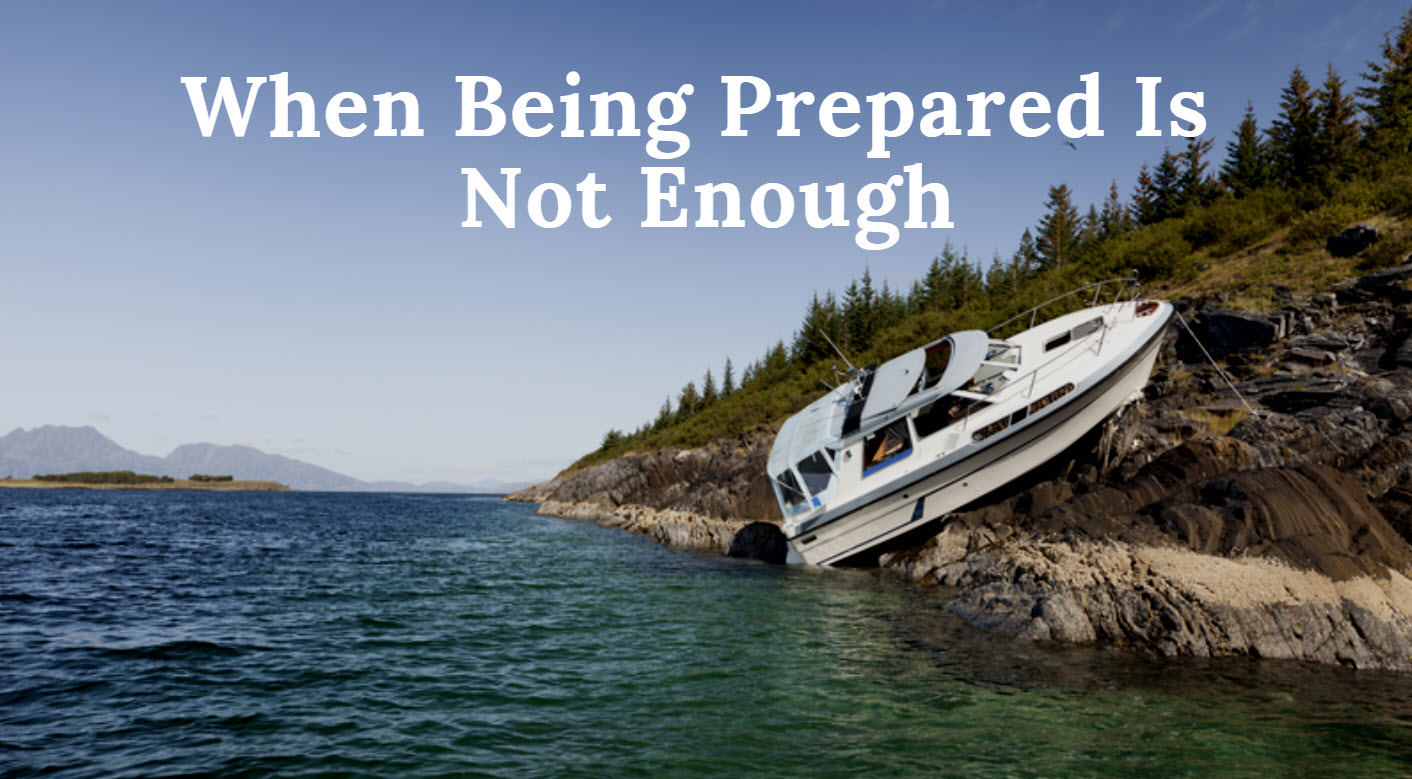 I just had a most enlightening experience. I would almost call it an adventure, but my wife describes it as a horrible nightmare. But it renewed my awareness of how life goes as planned…until it doesn’t.

We were driving from Annapolis up to Medford, New Jersey to support a family member undergoing radiation treatment. It was a beautiful fall day, with our yacht club’s fall racing series underway, the midshipmen of the Naval Academy playing SMU at home in the football stadium, and the Annapolis Powerboat Show in full swing, crowds filling the docks. Annapolis was really hopping when we left town, on a day full of promise. Annie, our faux golden retriever, curled up all comfy in her bed on the back seat of our Cadillac XTS.

The trip was uneventful, although the Bay Bridge traffic was backed up, so we took the alternate route of Route 95. Crossing over the Delaware Memorial Bridge, we picked up Interstate 295, which parallels the NJ Turnpike, heading north. Everything was fine, until a warning caught my eye as it flashed on the dashboard display. The right front tire was losing air. I had never seen such a message before, and although the steering felt normal at 70 mph, it didn’t last long. I slowed down and pulled off the highway just as we smelled rubber. We happened to stop right next to a sign they showed we were at Mile Marker 12.8 on Interstate 295 North. 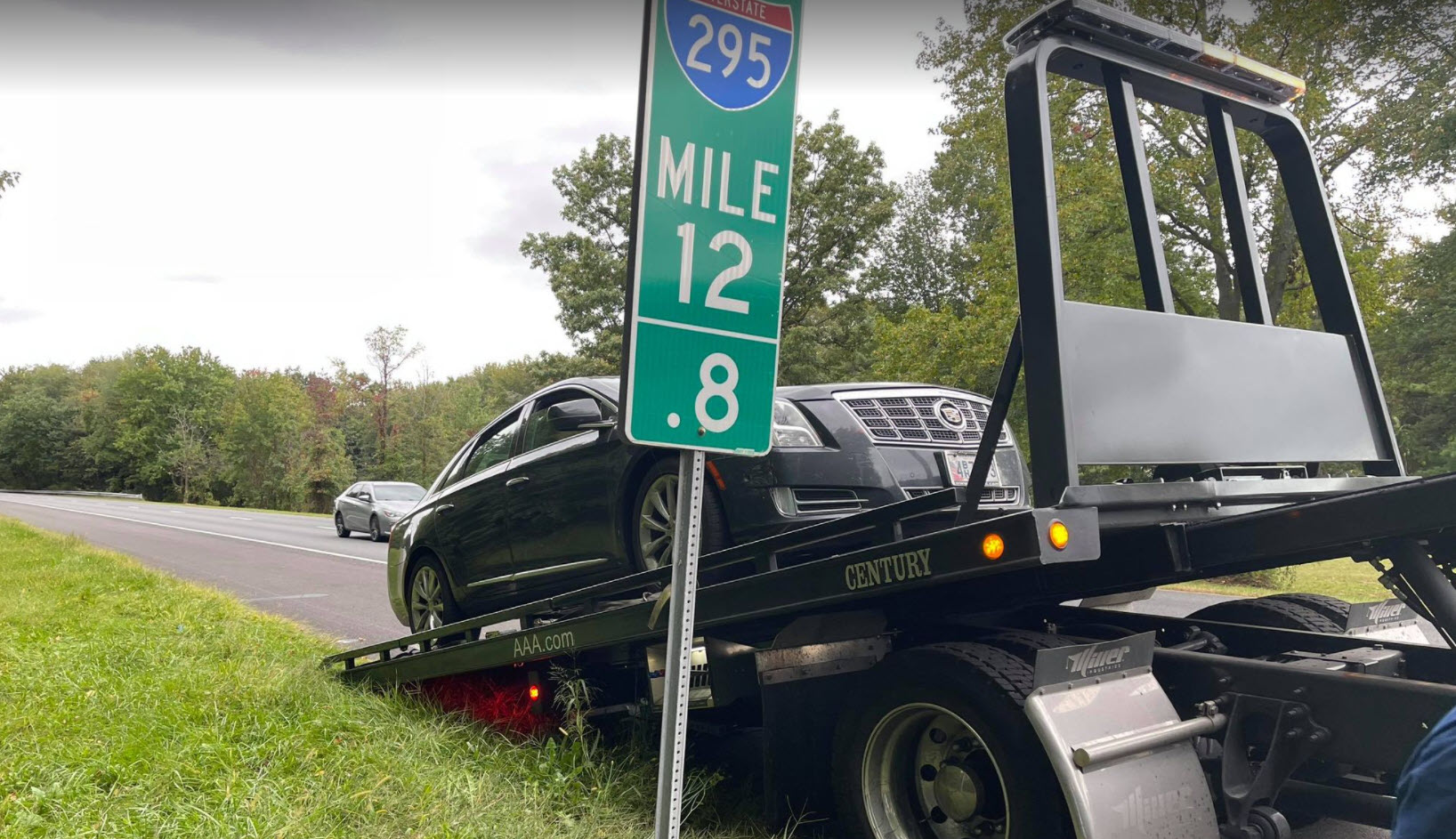 When was the last time you had a flat tire? Been a long time for me. I had the same feeling when the engine alarm sounded on our 25-foot Hunt Harrier. It was clear something was amiss, and needed attention right away. A bilge pump alarm would solicit that reaction, although the anxiety level would be far higher knowing that water was coming into the boat. A hose clamp had failed in the engine cooling circuit and the smell of melting rubber told me things had already progressed from “about to happen” to “too late, Dude, you’re problem is already here.” Smelled expensive, too. 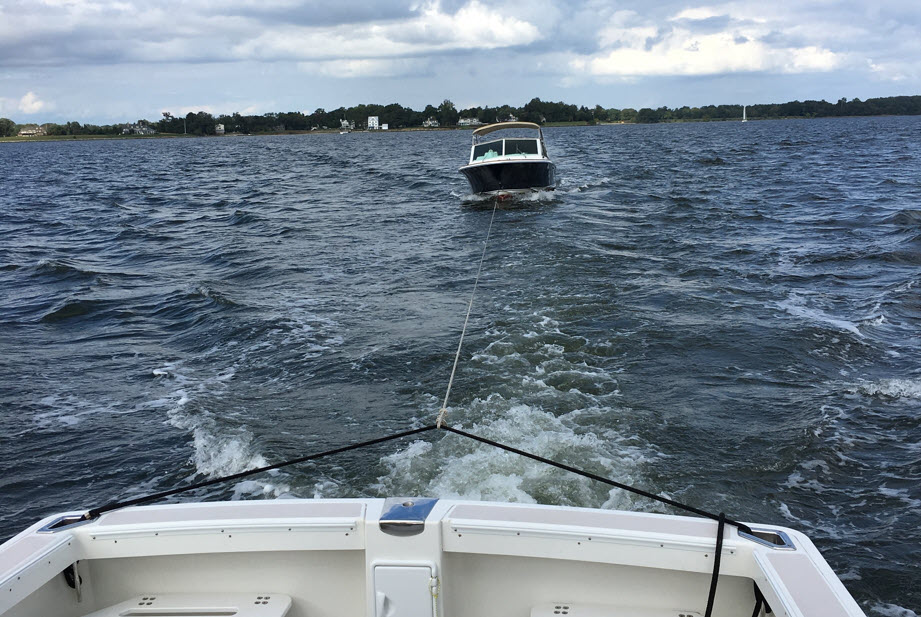 Back on the side of the road, only feet from two northbound lanes of rushing cars and trucks, I didn’t drive very far off the shoulder onto the grass because the right front tire would need to be on asphalt to be changed. I moved over as far as I could but still felt it unwise to open the driver’s door just yet.

There are times when even the most carefully inspected and maintained equipment fails, and there is nothing we can do to avoid it, except maybe never going anywhere. I’m a big proponent of staying on top of my equipment and systems, and their maintenance schedules, no matter if they are cars or boats or whatever. I much prefer to get things fixed before they develop into problems, as many boat owners do. But we also know there are no guarantees, as was the case on this Saturday afternoon.

The funny thing is that just that morning I checked my tires, something I do almost unconsciously as I move around the car in the garage to the driver’s side. While they are getting close to retirement age, they looked okay, and properly inflated. Like all modern cars, the Cadillac is equipped with TPMS (tire pressure monitoring system), which set off the alarm. But conducting a visual check is just an old habit from days when such technology did not exist.

Thankfully, I am a member of AAA, and, as it turned out, we needed to take the car on a flatbed truck to the nearest Cadillac dealer, as the large tires could not be found at any of the tire stores we called. And I was dumbfounded to learn this car did not carry a spare tire. Even though the owner’s manual clearly explains how to change a tire with the spare, what we found in its place was an air compressor. Which is why we needed a tow truck.

I’ve been a member of AAA off and on for most of my adult life, but I can count the number of times I’ve needed the service on one hand. It is my backup plan when things happen that are out of my ability to adapt, improvise, and overcome.

I have the same philosophy with boating and cruising. I maintain my systems and running gear, but I feel better having a backup plan as well. TowBoatUS and SeaTow are equivalent marine organizations to AAA, and provide the same piece of mind. I’ve been a BoatUS member as long as I can remember.

Depending on where you live, there may be compelling reasons to join one or the other, as they are not universally located everywhere in this country. BoatUS offers TowBoatUS, formerly Vessel Assist, although the service is known by both names depending on where you are. Collectively, they operate some 600 assist vessels out of over 300 ports. They can help with towing, fuel delivery, soft groundings, even jump starting an engine with a dead battery. 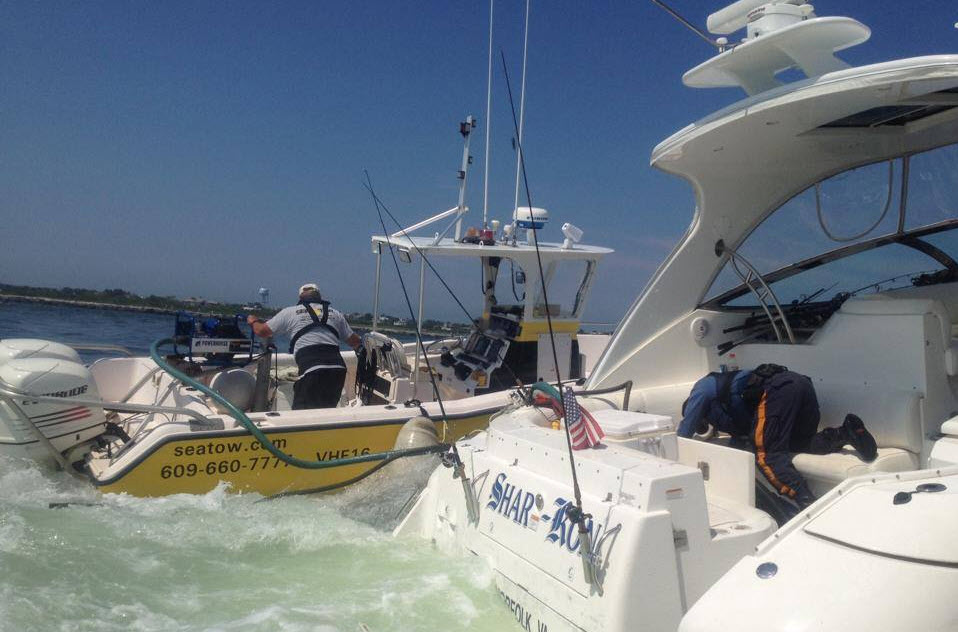 One must join BoatUS to enroll in this service, and depending on which membership level you choose, assistance can come to you up to 50 miles from the closest TowBoatUS home port. They are available 24/7 and can be reached by phone, VHF radio, and the BoatUS app.

SeaTow is another premium towing service that provides essentially the same service to its members. So, depending on where you boat, they may be a closer-to-you option. There are over 100 SeaTow franchises around the country.

If you go cruising, it also helps to join other organizations that may serve as your backup plan if you need help. The American Great Loop Cruisers Association (AGLCA) is well worth joining if you intend to cruise any portion of that 6,000 Great Loop around North America. Its resources can answer questions, help locate services along the way, and provide the reassurance that you are never really alone when something happens.

(Below: Joining the AGLCA offers many resources like this interactive map seen below.) 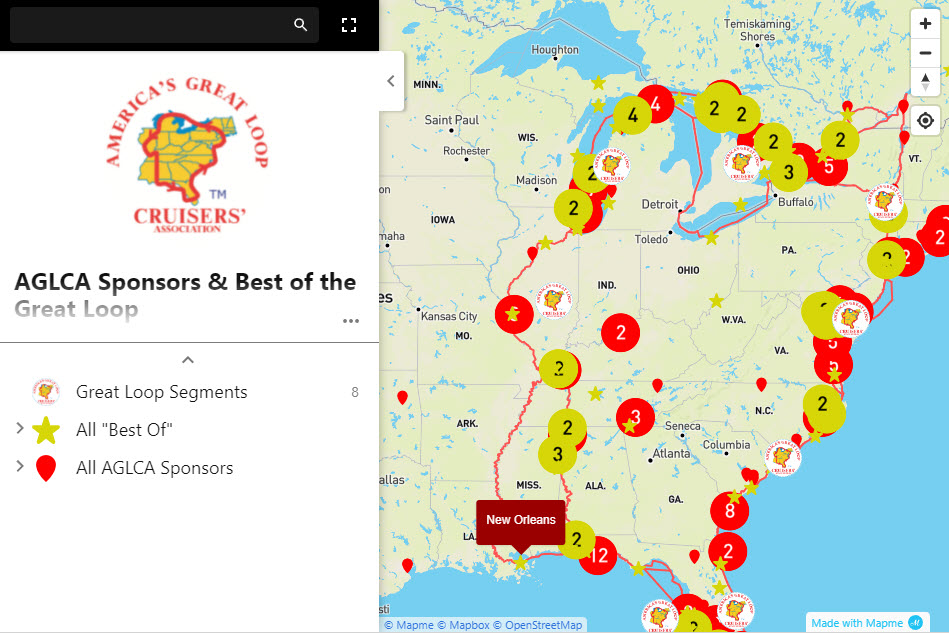 Other organizations include the Ocean Cruising Club, which has Port Officers around the world to assist the needs of transient cruisers. If I planned to head off to do extended cruising outside of the normal coastal cruising scene, I would make sure I met the requirements to join this worldwide cruising organization.

A new set of tires installed by Holman Cadillac in nearby Mount Holly got us back on the road, and life goes on.

I’d like to share some other observations from this experience. We sat on the side of that busy highway, emergency flashers on, for about two hours before the first AAA truck arrived. (Unfortunately, he came to change the tire, which is when we discovered Cadillac no longer includes a spare tire, at least on this model. The call went out for a tow truck, which arrived shortly after.)

During those two hours, hundreds or thousands of cars, motorcycles, and trucks flew by us at 70+ mph. In all that time we did not see one police car or state trooper, not even the NJ DOT service trucks that cruise the interstates for just this reason. I found that astonishing. Also astonishing was the one person who did pull over to offer assistance. She was a pretty young woman in a flannel shirt and jeans who stopped to see if she could change the tire for us. I’m guessing she was military or off-duty law enforcement as she was definitely squared away, fit, and obviously knew her way around a wrench.

When I contrast this to boaters in trouble on the water, I know without a doubt any nearby boat operators would be quick to respond, and come to see what was wrong and how they could help. We’ve all been there and done it. Hit a log in the water that bends a prop, and a fellow boater may give you a tow, happy to help. It makes us feel good, and is the common bond we share as boaters, a natural Good Samaritan mindset. Motorists on a busy highway do not share that feeling.

And the absence of state or local law enforcement or service trucks also reminds me to never assume “official” help is minutes away. I’ve researched and written on this subject for the U.S. Naval Institute regarding the realities of 9/11-type events. The first responders on the water are always going to be other boaters, eager to help. The assumption that municipal and state or federal assistance is right there when you need them is mostly an illusion. Which is why we need to take care of ourselves and each other on and off the water.

A powerboat had a small explosion and then caught fire just south of Annapolis a couple of years back. Within a minute or two, nearby boats safely transferred the family off the burning boat and everyone was safe. The marine police and DNR boats did show up but the fire was out of control by then. It would have been a disaster, as most small boats do not carry life rafts.

Another Good Samaritan event that comes to mind was when friend Chuck Wurst was cruising on his Nordlund trawler in Southeast Alaska. He heard a call for help on the VHF radio, but, for whatever reason, the Coast Guard could not hear the distress call. At the time, Chuck owned a marine electronics company that served the commercial fishing fleet out of Anacortes, and so had equipped his own boat with the very best gear they used to fish the Bering Sea out of Dutch Harbor in the Aleutians. His Morad 10dB antenna was able to pick up the call for help that was just too far away from the Coast Guard station. So, Chuck became the communications link between the boat in distress and the Coast Guard, relaying messages as they coordinated a rescue. (Needless to say, I bought the same Morad antenna when outfitting my big power cat, but that is another story.)

In any real emergency on the water, especially in the waterways and coastal areas most of us cruise, call MAYDAY on VHF Channel 16 and the Coast Guard will hear you. The Coasties will surely be there as quickly as the cavalry, as assets in the air and on the water are quickly dispatched. Story after story tell of the heroic and outstanding service of the men and women of the U.S. Coast Guard.

But that wasn’t us today, sitting on the shoulder of Interstate 295 in New Jersey, and there was no real emergency. Only a destroyed front tire. And the downright scary feeling as the car shook every time a truck blasted by. I shudder to think it happening at night, or in driving rain.

Always have a backup plan. Hopefully you will never need it, but then, if you do…