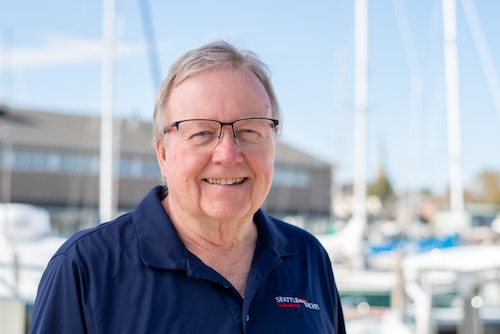 I have been boating since I was 11.  Learning to sail on Sunfishes and a Pearson 35 in the Annapolis area down into Virginia.  During college at Univ of Hawaii I crewed on several boats in a variety of races between islands and around islands.  I was a crew member on the Golden Eagle yawl where we cruised the islands.  After college I lived in Europe and sailed classic wood boats in several large lakes and along the coast of Northern Italy.

Later I moved to San Francisco where I skippered my boats in multiple races including the Silver Eagle race, Farallon Island races, both crewed and single-handed versions.  Plus several other races and cruises up and down the coast of California.

I have owned multiple sailboats from Catalinas to an Islander 36.  I currently own a 1972 traditionally rigged, wood schooner; gaffed rigged, bowsprit, deadeyes, and pin rails.  I have owned her for 15 years and I am looking forward to another 15 years….at least!