The Lure Of Electric Boating 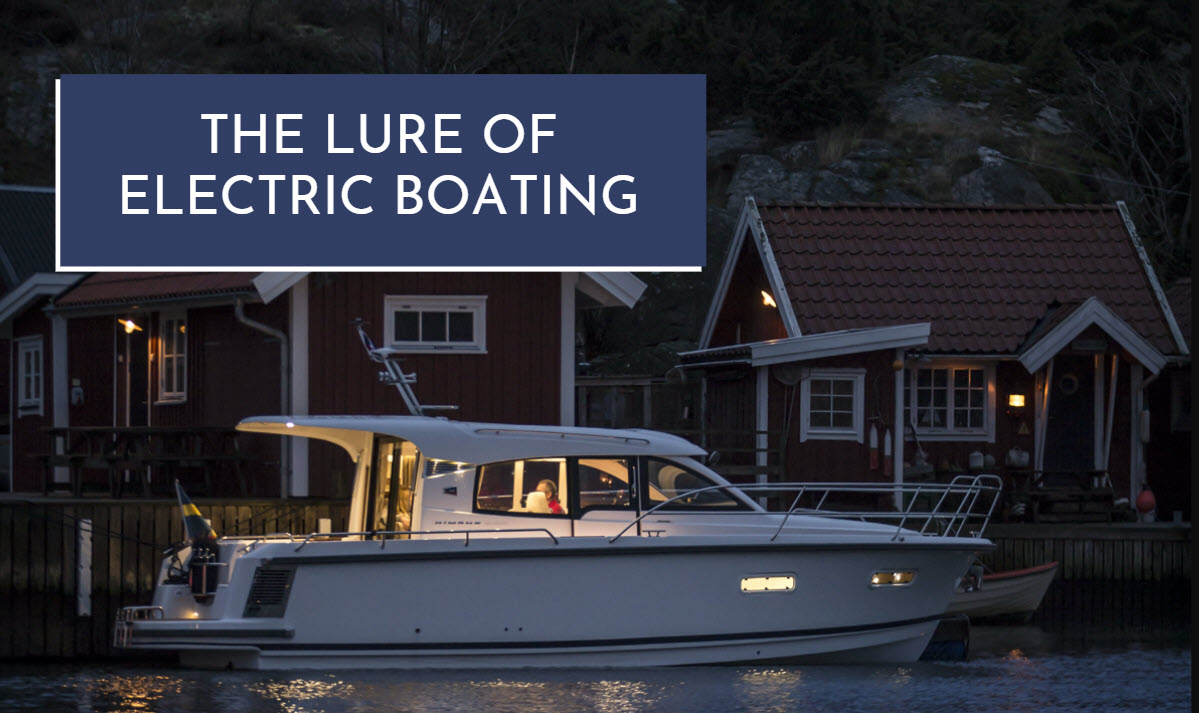 For some time now, we have seen the “green” movement slowly come of age, with real solutions and new technology that we could not have imagined a generation ago. In almost every aspect of life, from cordless toothbrushes that magically recharge without wires, to electric lawnmowers and power tools.

(Just to get this off the table, while the concept of “green living” is enticing on many levels, it is important to recognize that the batteries that “power” our electric bikes, scooters, lawnmowers, and vehicles, are simply storage banks. The energy that is stored in them comes from sources that may not be particularly green, such as coal-fired generating plants. So, while it may be cool to embrace the thought that battery-powered machinery is totally clean and does not pollute, and that the perfect world runs off solar and winds energy, it is simply not the case in the big picture.)

I have followed the evolution of the RV world, and I can’t believe how quickly manufacturers have responded to the demands of a younger generation to eliminate onboard generators and ditch the propane stoves and appliances. They want solar and other sources to keep their lithium-ion batteries topped up. Off grid adventure, far from RV parks and hookups, is a common theme today. Even as I contemplate my own future adventure of taking a camper van up to Alaska and the Northwest Territories, I envision using renewable energy besides the diesel or gasoline fuel that powers the van. 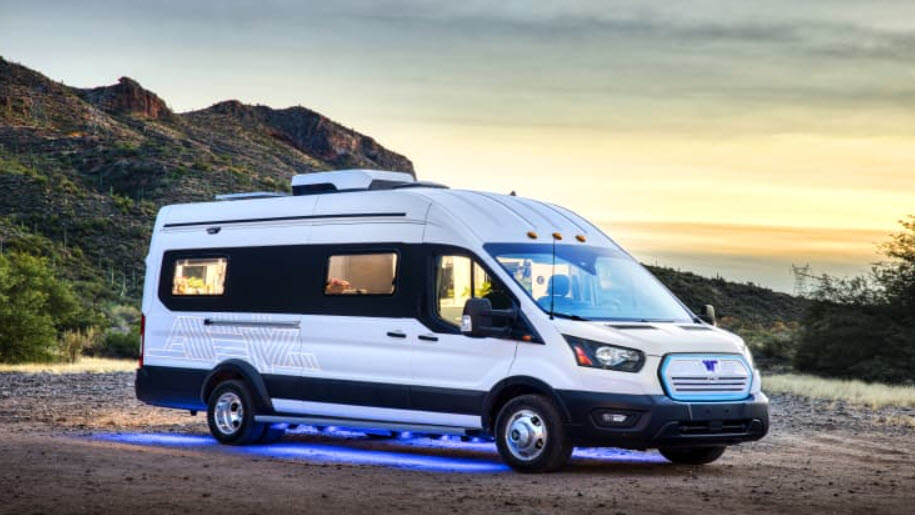 Boating, too, has entered the electric age. When ethanol in gas became an ugly thorn in every boater’s side, rendering small outboards unreliable (smaller engines utilize carburetors, while the fuel injection in larger engines do not have the same issues). While some forward thinkers converted these small outboards to run off more stable propane (which we did as some of the pioneers of that technology), the real solution came with the introduction of the Torqeedo electric outboard. For thousands of boat owners and cruisers, it was the ideal propulsion solution for ferrying crew and the dog ashore by dinghy, with a simple turn of the wrist. It is now mainstream, and there are other companies that offer electric outboards.

But electric propulsion remained pigeonholed in smaller applications, suited only for small sailboats, dinghies, and other small boats. Larger propulsion systems were out there, but battery technology lagged far behind, that is until the introduction of hybrid and electric vehicles (EVs). Battery technology literally skyrocketed overnight to fit the growing interest in the EV. So, we eventually had solutions that made electric boating an option.

Hinckley unveiled an all-electric runabout at the Annapolis Boat Show a few years ago, and there have been other attempts to use electrical power to run powerboats, either as an electric-only boat or a version of the diesel electric propulsion that has been around since military submarines were first introduced.

I took one of the early Greenline yachts out for the day in Ft Lauderdale. It was 2008, and the yacht was a new product from the high-tech builder in Slovenia. With a Volkswagen marine diesel to supplement its electric drive, I recall it was okay going slow on all-electric, for a while anyway, but the low speed and lack of range seemed minimal. Fine for touring the canals around Ft Lauderdale, but it did not seem very practical beyond cocktail cruise duty.

Today, Greenline is on the fifth generation of its Hybrid Drive, and the boat can operate for several hours at five knots under electric power alone. When more speed is needed, or it is time to recharge the batteries, a single switch turns on the Yanmar diesels which will move most models over 20 knots. The diesels power the boat, while at the same time recharge the batteries.

Torqeedo (now part of DEUTZ Group since 2017) has continued to evolve its own technology and product line, with well over 100,000 units of various models sold worldwide. The company has partnered with other companies to integrate complete propulsion systems for boats of all kinds.

Seattle Yachts represents Nimbus Yachts, a Swedish builder of quality boats that range from day boats to family cruisers. Since 2009, Nimbus has offered an all-electric system in a couple of its boats, particularly those intended to be out for the day or over a weekend. Nimbus currently offer two models with optional electric power, the 305 Coupe, and the 305 Drophead day cruiser. The boats can normally be ordered with Volvo D3 diesel engines, to enjoy speeds in the upper teens to 20+ knots.

But they are also available with Nimbus’ E-power propulsion system. Partnering with BMW, Torqeedo developed a complete package that incorporates its 50i/1800 Deep Blue electric drive, coupled with a BMW i3 Lithium-Ion battery bank, which stores 42.2 kWh of energy to power the electric drive. So equipped, the day cruiser can travel at 5.7 knots for up to 53nm.

To put that into perspective, this is about the distance of a round trip between Anacortes and Friday Harbor in Washington State. Slow down to 3.7 knots and the range goes up to 86nm.

Now here it gets a little tricky, given where we are with this technology in 2022. When you return to the dock in your Nimbus electric boat, it is necessary to recharge the batteries. Using the 110-volt outlet at most slips, this is considered Level 1 or “trickle charging.” And it is slow. 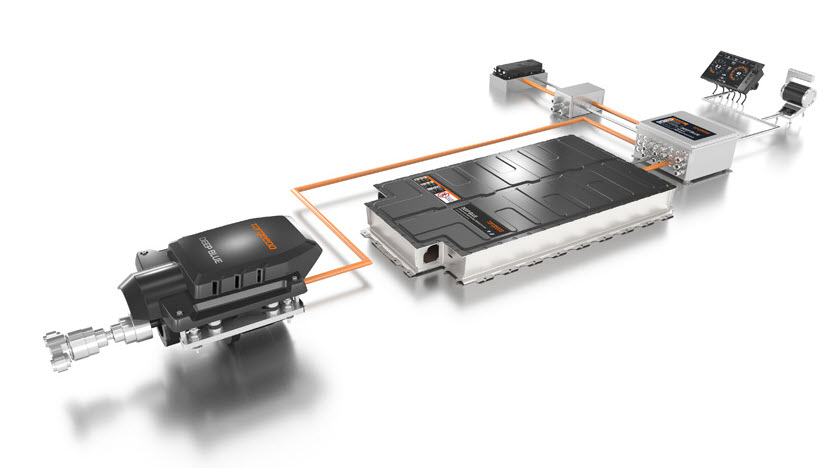 According to published documentation on the Nimbus 305, the boat’s battery system will recharge in 16 hours from a 230VAC power source, and 8 hours from a 380VAC source. And this is the issue right now. But Nimbus continues to evolve its products and their performance, so I expect we’ll see further developments in these systems to offer even better choices for those wanting to go electric.

Super-fast charging stations for a Tesla and other EVs have popped up across the country. The vehicle display will direct you to the nearest station and even tell you availability and how much time you will need to get enough charge to go 80 percent of the range of the vehicle.

There is nothing similar for boaters at this time, with very few exceptions (I did locate one in Lake Tahoe). Commercial charging stations do exist, such as for Niagara Fall’s Maiden of the Mist, which recharges as it loads and offloads passengers, but this is a tiny segment of the marine industry. 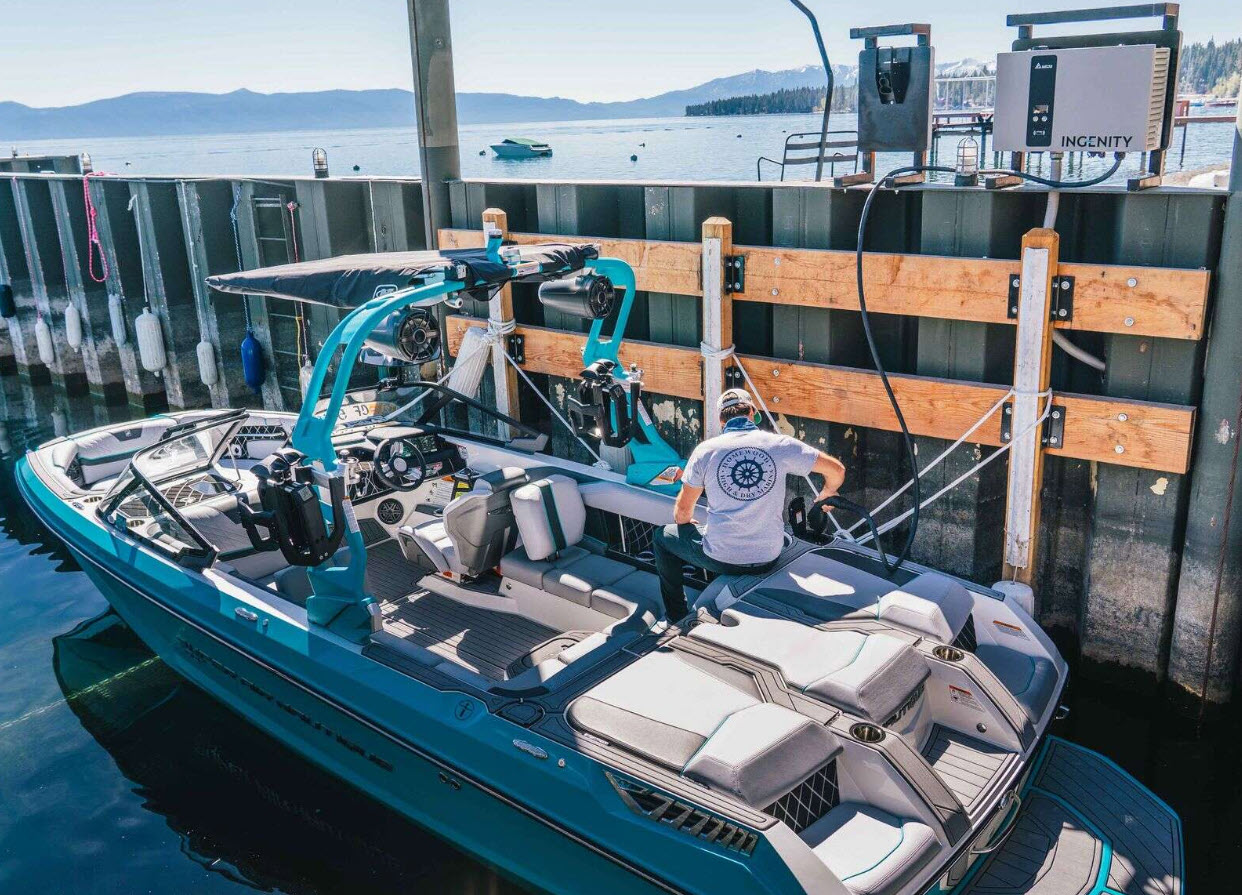 Your local marina’s slip likely has a single 30-amp 110VAC outlet. You are limited to Level 1 charging only. If you can find a larger slip that offers 220VAC at the pedestal, then you can have Level 2 charging with the proper plugs and adapters.

Charging an EV in the garage was a novelty only a short time ago, but that is no longer true. While many EVs come with a plug for the standard 110-volt outlet in a garage, most owners install an upgrade to Level 2 charging.

Again, drivers can now find Level 3 Super Chargers in enough locations to make EVs practical and attractive for more people. But nothing like this exists in recreational boating right now.

So, for the time being, if the appeal of an all-electric boat fits your style and environmental resolve for fun on the water, you need to consider installing a Level 2 charging station on your dock. And do not expect to find fast charging stations along the Great Loop or elsewhere.

So far, I have not mentioned those cute Duffy electric boats intended to creek cruise one’s home waters. But they are not cruising boats, although owners love them.

And while I hesitate to bring this up, given the state of the current electric world, recharging one’s Tesla or EV is not always free. Costs for recharging vary all over the board, but when it becomes available at marinas (once their electric infrastructure can handle such loads) expect it to cost more than tip money at the fuel dock.

It is a developing situation, much like it was for the initial introduction of EV electric cars. It took a significant investment by Tesla to get charging stations positioned around the country to make its vehicles relevant as a serious travel machine outside of city limits.

While I am talking about electric and diesel electric propulsion, we absolutely must talk about the USS Makin Island, the eighth and last of the Wasp-class Navy amphibious assault ships. Commissioned in 2004, it is 847 feet long, and a draft of 28 feet. With a crew of 66 officers and 1,004 enlisted crew, the ship can deploy almost a full strength Marine Expeditionary Unit of 1,687 Marines anywhere in the world. 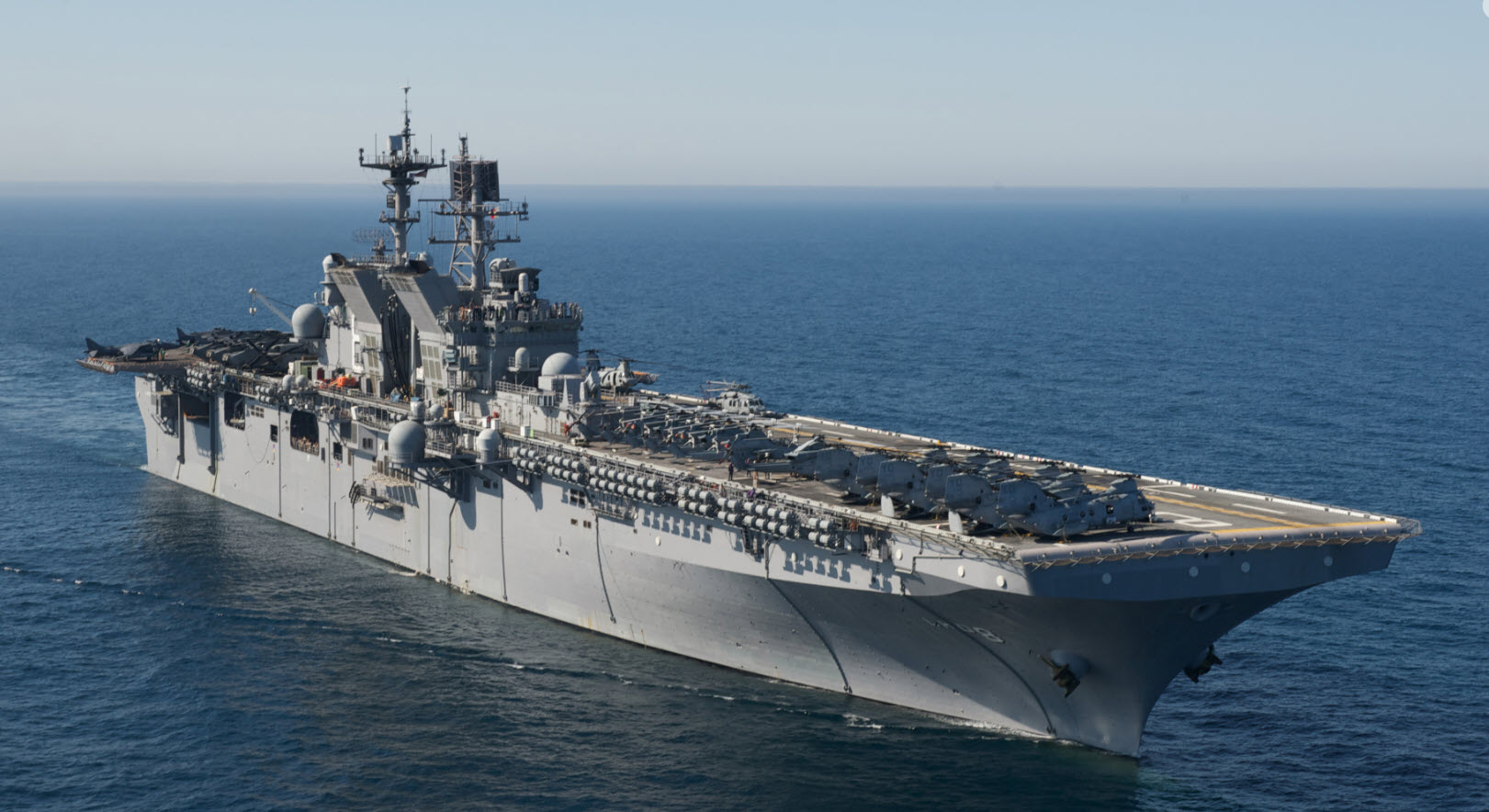 What is unique about the Makin Island, compared to her seven sisterships is that the ship was built with a diesel electric hybrid drive, along with two GE gas turbines.

Under diesel electric power, six 4,000kW generators provide power (at optimum efficiency) to two 5,000hp electric motors to drive the ship at 12 knots. This is her normal operating speed 70-percent of the time. When she needs to go faster, power is switched over to the two GE LM 2500+ gas turbines (combined 70,000 shaft hp), for a cruise speed of 25 knots.

What is fascinating is the technique the crew developed to get the maximum fuel efficiency out of this unique drive system, in what they call, “Sprint and Drift.” Compared to a traditional ship that travels at one speed, they plot the same course and calculate how quickly the traditional ship would need to travel to reach a distant waypoint. When that information is determined, the crew calculates how best to use their dual propulsion systems.

Once under way, they run the ship using the turbines at high speeds to reach a position well ahead along the course line of where a normal ship would be at that same point in time. Then the crew switches over to the diesel electric 12-knot speed and aims to reaches that distant waypoint at the same time as the traditional ship by slowly advancing toward it under diesel electric at 12 knots. Hence, the Sprint and Drift.

The ship continues to travel to the next waypoint by alternating between high-speed turbine power and slower, efficient diesel electric power until they reach their final destination.

In one seven-month deployment, the USS Makin Island saved more than four million gallons of fuel compared to its sister ships. The estimated cost savings in fuel was more than $15 million.

It is not hard to imagine how using a similar Sprint and Drift process could translate into great efficiency and fuel savings in future cruising powerboats with dual propulsion capability. Using the diesel engines at higher speed, then closing in under slower, more efficient electric (or diesel electric) power.

I have no doubt that we will see many more exciting developments in the next five years. Or sooner, given the rate of change in our world today.

And with the price of diesel fuel, it can’t come too soon.